Costa Rica News – Investigators and park rangers are going to place acoustic monitors on three species of shark, in order to learn about their movements and how they use Isla del Coco as their habitat. 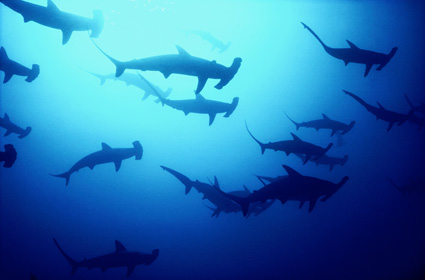 With this information, park rangers are hoping to come up with better conservation strategies for the groups, given that Isla del Coco is one of their principle habitats in the Eastern Pacific Tropics.

This project grew from an alliance between the Friends’ Foundation of the Isla del Coco (Faico) and Misión Tiburón (‘Shark Mission’), organisations which work together in the Marine Conservation Group of Isla del Coco (Acmic).

“The continuation of studies of deep-sea species in the Isla’s bays, along with active involvement from park rangers, is so important for conservation, but a lack of resources keeps us from reaching our goals”, Géiner Golfín, administrator of the National Park, commented.

Between June 2014 and July 2015, the investigators will make three separate expeditions to put the acoustic receptors in place; the two types of monitors will be conventional ones (flexi) and acoustic ones.

This method has already been implemented in Costa Rica’s Golfo Dulce, where biologists from Misión Tiburón are studying how hammerhead shark offspring are using the environment.

“The positioning of the acoustic markers on this species will allow scientists to detect if one of the tracked specimens moves towards another oceanic island such as Malpelo (Columbia) or Galapagos (Ecuador) or even towards other coastal areas of Costa Rica. If there are receptors installed, we can connect the signals between Isla del Coco and other places of relevance to conservation”, the investigators said in an official statement.

According to Andrés López from Misión Tiburón, the study will focus on the whitetip shark (Triaenodon obesus ), the blacktip shark (Carcharhinus limbatus ) and the tiger shark (Galeocerdo cuvier ).

This study will be linked with a previous effort carried out by the park rangers and Misión Tiburón biologists who were trying to monitor and measure the population of whitetip sharks on Chatham Bay.

Hunting Ghosts at the Madison Mansion & Other Haunted Houses

Excavating the History of Costa Rica