Hunting Ghosts at the Madison Mansion & Other Haunted Houses

Ghosts & the Supernatural – Picked up Terri and Emilio from Galt and brought them to my house and off to Esparto we went. I investigated this home before, when it only seemed like there was ghostly activity. Things have shifted to the dark side, it now appears that there is an evil force in this home. Below are the activities that have occurred in this home, told to me by Tamara.

1. The original house that Tamara and her husband lived at was haunted. In 2001 a fire took place at this home. They lost 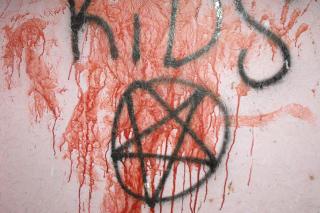 everything. They now reside in this new home, which is the same property. The original house that was lost in the fire was built in 1918.
2. Now that they live in this new home, they have experienced activity. Tamara stayed the night in her child’s room. Tamara could not get out of the bedroom and everything was taken off the walls. She finally escaped out of this room in the morning.
3. Numerous incidents where TVs and computers turn on and off by themselves, this includes other appliances like the air conditioner. Another incident is a bottle of fingernail polish exploded on the kitchen counter, the refrigerator door will open by itself. A group of rags that were hung separately were found bunched up together on the stove.
4. Leon the part Chow and part lab will bark for no reason.
5. Tamara hears voices throughout the house that sound like conversations of other people talking.
6. The behavior of one of her sons, her older son who is showing irrational behavior with his girlfriend.
7. The worst thing that happened was to Tamara’s husband. Tamara’s husband may have been possessed. The reason why I believe this, is that he went from a loving husband to a husband with violent mood swings and his negativity was completely out-of-character. This behavior leads to his downfall, in which he is now paying the price. Most of what happened to her husband is confidential. I will mention on one night, he seemed like he was lethargic and appeared to have no emotional facial expressions and came into the bedroom and shot Tamara 16 times with an air soft BB gun.

FIRST INVESTIGATIVE SESSION BRIEFING:
Before the investigation started, I had my two sensitives Deanna and Terri take a walk around the house and barn area. Deanna picked up on something dark. During the initial briefing, I got scratched on the top of my left hand, the scratch is very noticeable. I did not feel the scratch, but Deanna noticed it immediately and asked me what happened. I was shocked to see the scratch. I have been on 900 investigations and this is the first time I have ever been scratched. Deanna says: When I walked into the washroom during the preliminary round I felt the spirit world trying to connect to me. I saw the hairs on my arm raise and goose bumps appeared on my body. I felt like an electric feeling pulsing through my body. It feels like someone was hugging onto me. On the first round, I sat inside of the washroom. I felt the feeling again yet it was slightly softer. I sat in a chair in the washroom and I tried to get an EVP. I could not make a connection yet I could feel something right next to me. I took pictures and some were blurry. I went also to an old Ford Mustang and tried to get an EVP. I felt nothing and got no evidence. Then I went around to the side of the yard and sat in a tree with my green obsidian crystal skull. I didn’t feel anything there and I got no EVPs. Terri felt a presence in various areas of the home and she saw a figure sitting on a chair. Emilio went everywhere trying to get EVPs and was unsuccessful. I believe they are hiding.

SECOND INVESTIGATIVE SESSION BRIEFING:
Terri heard leaves shuffling around, like someone was walking around outside and there was no one walking around. Deanna picked up the dowsing rods and brought them into one of the smaller bedrooms. She asked the spirit if it was once a person. The rods crossed into an X, indicating ‘yes’, that at one time it had a corporal form. She asked if it was a protective spirit and it indicated ‘yes’. She went to the master bedroom and sat on the floor right next to the bed. She left her crystal skull that was protective in the kitchen. She asked repeatedly if it was a human spirit it kept indicating ‘no’. The rods sped up in a circular motion and went round and round very fast. This indicated chaos. She asked if the spirit was a demon and it said ‘yes’. She asked if it caused violence and it said ‘yes’. The camera that she was video recording with switched off and it was not yet out of battery juice. She turned it back on and got several more videos in other spaces. She said that she could feel the entity in the room. 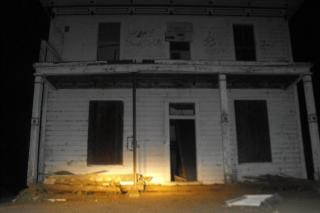 suit. Tamara doesn’t fish and she has no idea where the lure came from.

Perhaps the entity wanted to hurt Tamara and keep her from being baptized? On this night, I baptized Tamara and then had Deanna conduct a training baptism on Tamara. I also blessed the home. Tamara felt at peace after the house blessing and the fully submerged baptism by me and Deanna.

MADISON MANSION:
While driving down Highway 16 with Deanna, Terri & Emilio we saw a very decrepit abandoned 2 story home. We met up with Jesus Esquival and Graviela (Gabby) Heredia. In this abandoned home we found Satanic graffiti, Satanic symbols, the numbers 666 and vulgar words written all over the walls. The most shocking thing we saw was blood splattered on two walls. While attempting to get some EVPs, we finally hit pay dirt. A Satanic deep male voice says ‘GO AWAY!’. This was a Class A EVP and you will hear it on our video. We saw shadows darting here and there. Deanna captures a picture on what looks like a black vortex. We captured many orbs and designer orbs in our photos. Jesus tells us the urban legend of Madison Mansion. There was once a married couple that lived in this home.

The husband tied his wife in the back room and just kept her there. In this back room he would feed her while she was tied up. He eventually killed her and she still haunts this home. While we were taking pictures and trying to get more EVPs, two country boys in their pick-up came and locked the gate so we could not get out. They were laughing hysterically. We went down a dirt road and like out of a horror movie, I was thinking that these country boys could be the Satanists that frequently visit this abandoned home. The dirt road was narrow with ditches on each side of the dirt road. There was a few times where I had to turn around on this dirt road and I was nervous that I would send the Rusty Anomaly (my car) into the ditch where we would be stranded and become helpless prey to some savage backwoods Satanic cult. Deanna took charge and utilized the GPS and navigated us onto Highway 16. Her heroic feat kept us from being stranded in some ditch or becoming the ceremonial sacrifice to worshipers of Satan. Thank you Deanna for saving our lives! That was a close one!

Robin Williams Sums Up His Life in 2 Minutes (Video)