Costa Rica News – This will be Costa Rica trying to show the world that they are the “tough on shark finning”nation.  I would not want to this woman and involved in this trial. This trial reminds me of the fact that from time to time the USA has to pretend like they are the tough on drugs nation and the cartels offer a sacrificial lamb to allow the media and public to believe they are truly trying to stop the importation of drugs onto US soil. 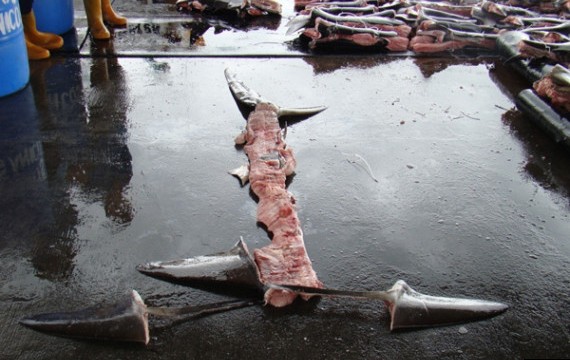 A woman identified as Kathy Tseng Chang, will be on trial beginning this Friday, in Puntarenas, where she is accused of landing 652 shark fins back in September 2011. The Coast Guard seized the fins at the time of her being caught with the carcasses.

Tseng and her crew used a new technique known as “back-boning,” in which the body is butchered away, leaving the sharks’ fins attached to the spinal column. This ridiculous tactic is the latest card in the game of getting around anti-shark finning regulations. You see, the law requires sharks to be returned to the land with fins still attached to their spinal columns, with the intention being that the whole body arrives on land in one piece.

Since the fins are worth 100 times more than any other part of the shark, fishermen don’t want to fill up their boats with the full bodies. Today there are 47 countries, including Costa Rica, that have legislation against shark finning.

There are a couple of problems though. Laura Chinchilla signed the law making shark finning illegal in 2012 which was after the alleged woman was caught with the shark fins.  Also the law that was passed in the late 1990s applied to trafficking of fins that have been cut from sharks’ bodies before the catch has reached the dock. I am not a lawyer but I would think that ex post facto application of this law would not apply in this case a she does not still have possession of the shark fins and the way she brought them to shore was not illegal at the time..

It’s been an uphill battle in Costa Rica. For a long time, they’ve been the leader in shark fin exportation. At least 350,000 sharks were killed for their fins in 2011. A nonprofit, Ethical Traveler, had to remove Costa Rica from its list of The Developing World’s 10 Best Ethical Destinations, on the basis that Costa Rica “allows the persecution of activists working against the illegal shark finning trade.”

This outrageous crime has become so widespread in the nation’s waters that they have issued an Interpol “purple” notice to the other countries with anti-shark finning laws, to make them aware of the increasing practice.

The trade in Costa Rica is controlled by the Taiwanese mafia because of the high value of shark fins in restaurants in countries such as Taiwan, Hong Kong and China where Shark fin soup can cost up to $100 a serving at the top high end restaurants.  The Taiwanese and Indonesian mafia even run their own private docks in Puntarenas which are known to the government and the Costa Rican police but incoming vessels are rarely inspected because they are afraid of the repercussions and harm that might befall them.

Shark finning happens on nearly a daily basis in the waters of Costa Rica and the mafias controlling the docks on the shores of Costa Rica are the ones that dictate who is allowed to operate in this trade.

This trade just like the drug trade with cartels importing drugs onto US soil will continue to be a part of life as I see no proof that Costa Rica is serious about cracking down on this industry.