Secession Petitions Now Filed for all 50 US States

Although we know this is not going to happen obviously when it comes to people being unhappy about the current US government is alive and abundant in every state in the union. 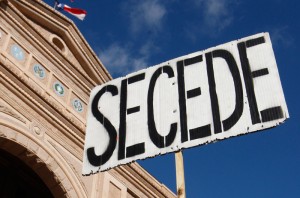 Petitions signed by hundreds of thousands of Americans seeking permission for their states to peacefully secede from the union have now been filed for all 50 states on the White House website.

The secession petition push began last week on the site’s We The People section after a Slidell, La., man filed a petition on Nov. 7 to allow Louisiana to secede. Residents from other states followed suit.

As of Wednesday afternoon, North Carolina, Tennessee, Alabama, Georgia, Louisiana and Texas—all states that voted for former Gov. Mitt Romney—as well as Florida each had accumulated more than 25,000 signatures, the threshold needed to trigger an official response from the Obama administration. Collectively, the secession petitions now have more than 700,000 digital signatures.

Texas is in the lead with more than 99,000, but Gov. Rick Perry said on Tuesday that he does not support secession.
“Gov. Perry believes in the greatness of our Union and nothing should be done to change it,” a statement from the governor’s office read. “But he also shares the frustrations many Americans have with our federal government.”
Meanwhile, residents of Austin, Texas’ stubbornly liberal stronghold, have petitioned the White House to allow the city to “withdraw from the state of Texas [and] remain part of the United States.”

Of course, the petitions are little more than symbolic—and nothing new. Similar petitions were filed after the 2004 and 2008 elections. And at least one petition filed on the site asks that the president sign an executive order to strip U.S. citizenship from anyone who signed a petition to secede and requests that they are “peacefully deported.”

Secession, though, is not the only thing people are petitioning the White House for. Included among the 140 petitions currently displayed on the site: two seeking federal legalization of marijuana, one asking for the halt of U.S. drone strikes and one demanding a recount of the election.