Costa Rica News – Recently CRT did an article on longlining and the fact that it was killing billfish in the waters of Costa Rica. Not mentioned in that article was the fact that billfish are not the only thing being caught by these fishing methods. 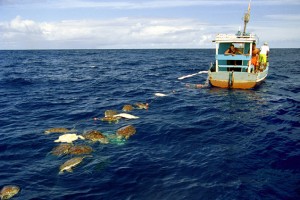 Although not the what is being fished for, sea turtles end up trapped in gillnets, longlines and trawls.

This is technically known as bycatch  and is one of the greatest threats to the oceans megafauna (mammals, birds and turtles).

In this sense, they realized that both the impact and mortality was significantly lower in longlining. (Still needs to be regulated)

“This surprised us a bit because we thought longlining was the leading cause of accidental death for both turtles and seabirds. This study shows that there is further action required to reduce the capture of turtles in longlines, but should focus more on shrimp nets and trawls, which were ignored in the past, “said researcher Rebecca Lewison told AFP.

It also records of bycatch in longline vessels occurred in both oceanic areas as near shore sites while gillnets and trawls were more prevalent in coastal areas.

Another observation made was that the records of catch rates and fishing effort were more abundant in the eastern Pacific, North Atlantic, south Atlantic and the Mediterranean.

“Many sea turtle populations could become extinct locally if by catch is not reduced,” the researcher Bryan Wallace.

To reach these conclusions, the researchers analyzed 1800 records of longline bycatch, trammel nets and trawls that occurred between 1990 and 2011, from 239 sources (scientific papers, technical reports and symposia).

“The results, based on the best information available, can facilitate prioritization of conservation efforts to reduce bycatch in fisheries areas could impact sea turtles,” said the study.

Let’s hope that with the efforts of some financial supporters that remain anonymous in CR and are pushing for these fishing methods to be abolished or regulated, that things change in the waters off the coasts of Costa Rica.