Longliners are killing the sport fishing industry in Costa Rica. It is a fact that few people are willing to talk about. Costa Rica, once known as the “Sailfish Capital of the World,” is under serious threat of losing an industry that generates nearly $600 million annually and supplies 4000 direct jobs and nearly 63,000 indirect jobs according to a study done by the University of Costa Rica, sponsored by The Billfish Foundation in 2009. But it is not too late to save it. 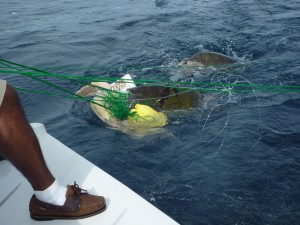 Sport fishing operators in Costa Rica have seen the numbers decline year after year but have not been very vocal about the problem for fear of scaring off potential clients. A tourist fisherman that has been coming for many years has seen the numbers drop also. They got used to raising 20 or more sails a day and have seen that number drop to 5 or less fish up in the spread a day. As a result of this they are going elsewhere. What has kept the industry hanging on by a thread is that first time visitors who don’t know about the glory years are content to catch 2 or 3 fish a day.

Long lining is a non-selective art of fishing where miles of line are laid out upon the surface with a baited hook suspended from a mainline every 10 meters or so. Dorado (dolphinfish) and sharks are the target species, and marlin, sailfish, and sea turtles are also caught on these lines. When longliners started baiting their lines with live-bait, the billfish bycatch skyrocketed. INCOPESCA, who governs Costa Rican fishing laws made some changes in December 2008 which was supposed to reduce the capture of billfish. None of these changes have been adequately enforced to make a difference.

The exportation of sailfish out of Costa Rica was banned. In 2008 and 2009, 34 and 40 tons of marlin respectively, were reported exported from the country. Sailfish has never had numbers reported because it was always exported as non-specified seafood. In 2009 and 2010 those numbers of marlin exported raised to 70 and 71 tons annually. Being a non-selective art of fishing it is not likely they were able to target more marlin and it is suspected sailfish was continued to be exported labeled as marlin. When busts were made of 7000 and 8000 kilos of sails in customs, those suspicions were confirmed.

Live bait was banned from use in certain areas. More and more longliners began using live bait when they saw other fisherman increase their catches and though very small, there was a market to sell their billfish by catch. More and more sport fishing boats reported violations but no was ever arrested.

The 15% Law – INCOPESCA declared that 15% of a longliners total catch could consist of sailfish. For example if a boat 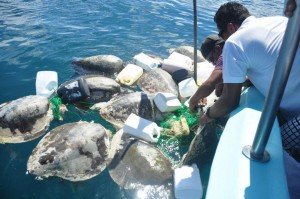 had 1000 kilos of dorado, the could legally bring 150 kilos to sold on the national market. Anything over 15% had to be donated to schools, hospitals, prisons, ect, but could not be sold. When the agreement was put into place in 2008, INCOPESCA was in charge of dispersing the excess by-catch. The agreement was amended in March 2009 to allow the the fisherman to disperse the excess. To this date no one knows of any sailfish ever being donated.

Illegal Unloading – Longliners are supposed to contact INCOPESCA if they are landing with sailfish onboard.   This is an unenforced rule. The trick is a very simple one. A boat lands at a dock. The INCOPESCA inspector who is supposed to inspect all fish landings may or may not be present. If he is, the legal catch is unloaded on the dock and inventoried by the inspector. The inspector never goes onboard and looks in the fish hold area. The inspection form is then filled out with no sailfish reported and the boats pulls away and lands at another dock to unload the sailfish. An INCOPESCA inspector caught doing this still holds his position as inspector today.

A New Sheriff in Town

One of the more vocal groups demanding the break-up of INCOPESCA has been PRETOMA , a Costa Rican NGO who has been battling INCOPESCA over the last decade about the finning of sharks and the illegal unloading of shark fins. Sharks must be landed whole in Costa Rica to prevent finning.

Last year President Laura Chinchilla appointed a new Ministry to investigate INCOPESCA and the problems faced by the different sectors in Costa Rica. Jose Lino Chaves was appointed Vice Minister of the group and leads the group. Chaves is a no nonsense type of guy with an environmental background. 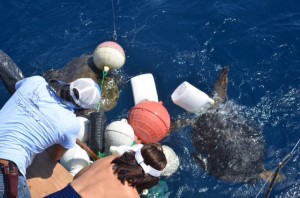 Then an unfortunate but very fortunate thing happened. Dead turtles started washing up on the beach in southern Costa Rica. The Coast Guard went out and counted 280 dead turtles floating in the ocean. Biologist Didiher Chacon went into action. He determined the turtles died because of illegal longline fishing. INCOPESCA got on the local news and said it was a bacterium that was killing the turtles.

Jose Lino went down to investigate. Local anglers told him the longliners were coming into the Golfo Dulce at night and catching bait and then placing live bait on their lines. Along with turtles sailfish that had rotted on the longlines were also floating offshore. Sport fisherman told Lino they had reported the illegal activity many times but nothing had been done.

The University of Miami was down the end of January and the first of April putting satellite tags in sailfish outside the Golfo Dulce to study them and their patterns. In less than 10 days 25% of the fish that thy tagged had been captured and killed by longline boats. “This is an indication of the extraordinary commercial fishing pressure existing in the area,” commented Dr. Nelson Ehrhardt, who heads up the program at the University and has been studying billfish in Central America for many years.

Seeing Lino threatened all the longline boats and they left the area. Sport fishing boats that had been struggling to catch two or three sailfish while their customers saw dead sailfish hanging from longlines  were starting to see big numbers. The International Light Tackle Association held a tournament the first week in March and 15 boats raised over 800 sailfish and caught and released over 400 in 4 days of fishing. The Boomer Esiason Cystic Fibrosis tournament also had fishing were boats raised as many as 30 fish and caught and released as many as 12 in a day. Fifteen to 25 sailfish up in the teasers a days was more the norm in March than the rarity. People were starting to remember the glory days and realize there is time to save the fishery.

INCOPESCA who have had deaf ears the to sport fisherman’s plight better wake up or somebody else will be doing their job.

There is a new sheriff in town and he plans on cleaning up this mess.

CR Women – “In the Business of Gringos”

It’s no secret at all…..except to the Ticos who treat reading material as Superman did kryptonite. Wanna keep a Tico from breaking in ? Hang books and periodicals in your windows(unless of course it’s the camel toe show weekly; full of Chinese crap for sale from a pulperia) . You’ll find the remnants of those in the front yard with the pages stuck together.