Costa Rica Travel – When you put a fishing line into the rich waters of the Pacific Ocean off Costa Rica, you never know for certain what might latch on to the other end.

You could engage in battle with a powerful marlin, or be up against the brute strength of a dorado, which is a fish with a couple aliases — it is also called mahi mahi in some parts of the world and dolphinfish elsewhere.

Fishing this part of the global seas could also provide you with a very good chance to meet the quite peculiar-looking and appropriately-named roosterfish with its spikey pompadour, or you could land a red snapper, a snook, or arm wrestle with the acrobatic and airborne sailfish.

But on a recent winter fishing trip off Quepos, located in central Costa Rica due south of the capital city of San Jose, Toledo husband and wife Scott and Alix Kozak found another resident of these tranquil waters, and it was in distress.

While on board the “Pacific Fly” and fishing for marlin and dorado with captain Rocco Ramirez and his crew, the skipper alerted the group that there was a sea turtle in the water nearby, and it appeared to be struggling. The Kozaks quickly pulled in their fishing lines as Captain Rocco swung the boat around and got next to the floundering reptile.

“As we got closer, we could see that the turtle’s legs were tangled in a fishing net,” Scott Kozak said. The captain managed to get the vessel alongside the turtle, which Kozak estimated to be about 35-40 pounds.

Ship mates Gabriel Contreras and Santos Barrios got hold of the radio buoy attached to the rouge section of fishing net and dragged the snarled mess next to the boat.

“We all knew that if we didn’t cut him free, that turtle was going to die,” Kozak said. “Santos and Gabriel jumped into action pulling the buoy in and then went to work cutting the turtle free. We all cheered as the turtle swan away unharmed.”

The crew from Pacific Fly then cut the netting away from the radio buoy so it would not entrap anything else in the future.

Kozak, who along with his wife owns and operates Manchester Roofing in Toledo, said the group was fishing in calm seas about 26 miles out, where the ocean is about 3,000 feet deep. He said it is common to see healthy, free-swimming sea turtles as well as porpoises that far from shore.

There are at least four species of sea turtle found in the waters off Costa Rica — leatherbacks, greens, olive ridleys, and hawksbills. Kozak said there is quite a bit of commercial fishing with nets and long lines in the Quepos area, with those entities pursuing mackerel, mullet, and other smaller fish.

When those nets and lines are left in the water for long periods of time without being checked, they become a serious threat 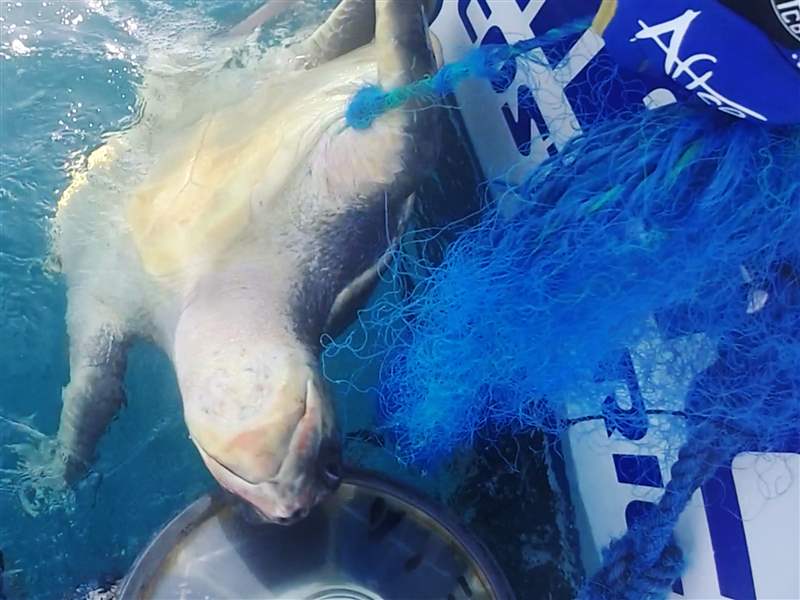 to the sea turtles that frequent these waters. Didiher Chacón-Chaverri with Latin American Sea Turtles (LAST) said his organization is working with commercial fishermen to involve them in the sound stewardship of sea turtles.

He said LAST is training these fishermen in both the need and the proper technique for releasing turtles, and about changes they can make in their tackle and approach to lessen the chances of harming sea turtles. Chacón-Chaverri said LAST is also training local police and assisting local authorities in the enforcement of laws protecting sea turtles. The group also continues its longstanding efforts to rescue and release turtles and provide environmental education to local communities.

Those efforts are showing some success, he pointed out, since between 2010-13 the group received about 30 reports a month of injured or killed sea turtles, and the frequency of those reports has dropped to around one per month. Chacón-Chaverri added that when the commercial fishing fleets are seasonally present near the sea turtle feeding grounds, more conflicts do occur.

The Kozaks, who bought a home in Costa Rica in 2016, were just grateful to be a small part of the effort to protect the turtles that share these waters with so many other sea creatures and fish.

“As it is every day, it was a beautiful day of fishing in Costa Rica and it felt great to be able to assist in an ocean rescue,” Scott Kozak said.

MICHIGAN FISHING LICENSES: New fishing licenses are required in Michigan by March 1 and the season licenses are valid through Feb. 28, 2019. The resident all-species annual license costs $26 but there are myriad other licensing options, including hunting & fishing combination licenses. Consult the mdnr-elicense.com website for a list of the available licenses and an explanation of what they cover.

WALLEYE BAG LIMITS: Anglers are reminded that the walleye daily limit for all Ohio waters of Lake Erie and the areas immediately upstream from the lake is six fish through Feb. 28, when that daily limit will drop to four. The four fish daily limit will be in place in these waters from March 1 through April 30, with a 15-inch minimum size limit as well. The special daily limits for the Lake Erie waters are in place on the Maumee River up to the dam in Grand Rapids and on the Sandusky River up to the Ballville Dam. Sometime in April, the Division of Wildlife will announce the daily bag limits for the remainder of the license season, which will be in effect from May 1, 2018 through Feb. 28, 2019.

By Matt Markey, From the Toledo Blade