I read this article and had to share it, for some reason I thought it was pretty funny especially since it happened in Orange County, California, known for the hoity toity people there.  Canyon High School will eliminate “Señores and Señoritas Day,” an event where students were encouraged to don Latino-themed attire, after several students this spring arrived to campus dressed as gang members, gardeners, border patrol agents and pregnant teens. 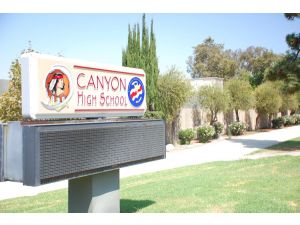 Orange Unified officials have announced they will also require the school’s administrators and staff to take sensitivity training, and vow to better review student activities to ensure they aren’t culturally insensitive.

These actions follow a district investigation into a complaint from a former student who called the “Señores and Señoritas Day” racist and offensive to Latino students and their families.

“It was determined some students dressed in stereotypical fashion which was not appropriate, and that the actions of these students were demeaning,” Orange Unified Superintendent Michael Christensen said Thursday in a written statement. “The district is committed to working with staff and students of Canyon High School to ensure a positive school climate and culture in all school activities.”

Canyon High held “Señores and Señoritas Day” June 6 as part of the school’s senior activity week. One boy dressed as a gardener, while another boy dressed as a pregnant girl pushing a baby stroller. Others dressed as gang members with bandanas and teardrop tattoo replicas. Some students wore plaid Pendleton shirts, ponchos, large sombreros and mustaches. A few students dressed as INS agents, walking around the campus “arresting Mexican students.”

Several students chronicled the event through Facebook photos and postings. Students have described that those wearing the costumes came from different races and backgrounds.

“Señores and Señoritas Day” has been part of Senior Week for the past three years. The district began investigating in June after former student Jared Garcia-Kessler filed a complaint. Garcia-Kessler, who graduated in 2011, said some students had also dressed inappropriately in previous years. He filed the complaint after he found out the school continued organizing the event in 2012, with even more students dressing in stereotypical costumes.

“It was very offensive. It was demeaning to my culture,” Garcia-Kessler said. “The school set it up as a day to celebrate Mexican culture, but some students thought it would be funny to go over the top. I just thought enough was enough.”

Aileen Sterling, the district’s director of secondary education, interviewed students and staff, and reviewed e-mails and Facebook postings as part of the district’s investigation. The investigation lasted over a month. Sterling concluded that Canyon High’s administration did not properly communicate guidelines for the event to students.

“There was a lack of oversight/supervision and that the school administration should not have allowed this activity,” 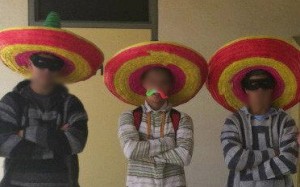 Sterling said in an Aug. 10 letter regarding the inquiry. “It is contrary to a positive school climate and it divides students of diverse backgrounds rather than pull them together with acceptance and understanding.”

Sterling found that in 2011 a few students also dressed inappropriately, as INS agents, but not to the extreme that occurred this June, she said.

Sterling would not disclose if the district disciplined any students or Canyon’s administrators and staff. The school’s principal, Greg Bowden, did not return Register calls for comment.

Besides permanently eliminating “Señores and Señoritas Day,” the district will require:

• The school to implement “International Week,” an activity to focus on the appreciation of different cultures, including discussions in history classes

“We are serious in our intent to provide effective action so that this will not recur and we are equally dedicated to provide the best education for the students of our community,” Sterling said.

Garcia-Kessler said he supported the investigation’s findings and new procedures put in place.

“In a district where we have so many immigrants, schools are supposed to be safe havens,” he said. “To bring this type of event to a school shows intolerance and does not support schools as safe learning environments.”

At the campus Thursday, the first day of classes, reaction among students and parents was mixed.

“I know there are people who are going to be offended by it and they need to have more common sense,” she said.

Junior Andy Hernandez couldn’t understand why someone would complain.

“They need to get a sense of humor,” Hernandez said. “There’s much worse things to worry about.”

Sophomore Alex McBride didn’t participate, but said some costumes seemed OK, while others were insensitive.

“I think there were some people who took it to the next level,” he said.

By FERMIN LEAL and DANIEL LANGHORNE / THE ORANGE COUNTY REGISTER

As a side note in Kingwood, Texas 98% white area. They had Halloween parties and the students had stereo type black costumes aka: Sambo, KKK and the girls were dressed as alley cat hookers. This created quite uproar from Both black/white community This was like 2003.