Sale of Tickets for Zapote Bullfights Start in November

Costa Rica News – Well for of those that are looking to see a great spectacle and attend an incredible Costa Rica event, Las corridas de Toros a la Tica (Costa Rican bullfights) in Zapote tickets go on sale in November. The Costa Rican bullfights have the peculiarity that no bulls are injured or killed during the celebration, as opposed to the Mexican and Spanish versions. 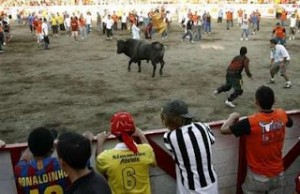 This year you do not have to stand outside the arena and wait in line to buy your tickets.

The organizers of bullfights for the festivities of the year end and beginning today announced they will sell tickets from the 15th of  November.

Alvaro Zamora, spokesman for the winners of the races, said he still does not know the  price and the places where you can buy the tickets but it will be revealed soon.

He added that it is quite possible to have lower rates for some events.

The event will be from December 25th to January 6, each day from 3 pm and 9 pm

I find it terrible, that animal cruelties like this are legal in a country as paradisiacal as Costa Rica!

Just to let you know, these bullfights differ from the Spanish and Mexican Bullfights as no bulls are injured or killed during the celebration.