Costa Rica News – Well the punishment for crimes in Costa Rica never ceases to amaze me.  I mean seriously, what kind of example does this set?  These 13 police officers took bribes instead of having the violators pay the fines and the punishment for this for them is a 6 month suspension WITH PAY!!!! Are you friggin kidding me? 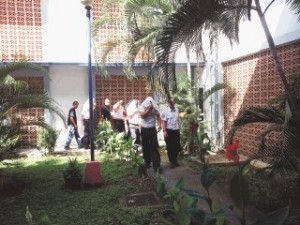 A judge suspended from office 13 traffic cops, who apparently were paid kickbacks in exchange for drivers not to fine them for breaking the law. The move came yesterday at a public hearing that began at 9 am and ended at 6 pm

Other than the measures imposed by the judge, are barred from leaving the country, must sign in every 15 days, live at a set address and telephone number, and cannot go to their workplaces.

The policemen were suspended from office for six months, but continue to receive his salary.

The defendants were arrested on Monday after the drivers affected interpose the respective complaints against officials.

The agents of the Judicial Investigation Organization (OIJ) conducted monitoring officers to check the fraudulent conduct of which they are accused.

Authorities said the suspects charged between ¢ 10,000 and ¢ 40,000 to the drivers, and, according to the plaintiffs, foreigners were charged in dollars.

The Judicial Police reported that the investigation of these events began in March.

Sale of Tickets for Zapote Bullfights Start in November

With pay with, with benefits and Christmas bonus coming. All intact. It will be a 3 month vacation then back to work as usual. I bet the other transit cops are pissed they did not get such a deal as well. Costarricense here like to give their hard earn money to the judges and give the poor cops a break on a bribery and money grab. Gotta love the Ticos.

Whats new ? You need to remember everyone and every thing in Costa Rica is for Sale . Dont worry , with leadership like this soon the Drug Cartels will be managing the country if they are not all ready doing so. The Government seems to be run by very disorganized ,uneducated children , maybe as a result of the lack of education system here………. so screwed up

You see it going to cost thousand of dollars over the next 6 months paying these Transit cops their salary and benefits. No wonder the corporations/business here do not want to pay income tax to Costa Rica government. What a waste of money and the dog and pony show continues. Judge should be fired Oh! wait then she gets what 1 years worth of pay for nothing as well… beat goes on!