Costa Rica News – The area area between Dominical and Coronado along the southern Pacific coast is sometimes referred to as the Whale Coast. Why? Because at certain times during the year it is one of the best spots for watching whales. 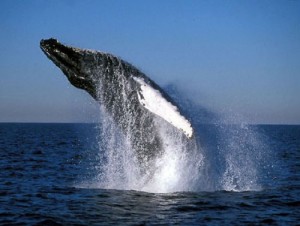 Humpback whales pass through Costa Rica’s Pacific seas regularly between late July and November, and again in December through March as they migrate to and from their feeding grounds in the North Pacific to mating grounds in the warmer waters off the coast of Costa Rica. Whale watches often see mothers with their young calfs and males putting on great shows of strength to attract mates by leaping out of the water.

Costa Rica has the longest humpback whale watching season in the world. Humpback whales are one of the most often-sighted whales in Costa Rica. They have broad, round heads that look long and slender when viewed in profile. Humpbacks eat up to 1.5 tons a day. These marine giants measure 40-50 feet, weigh approximately 25-40 tons (50,000-80,000 pounds), and live at least 50 years.

It is interesting to note that there is a spit or large strip of land near the town of Uvita, south of Dominical, that at low tide actually resembles the shape of whale’s tail when viewed from the hills above. This natural wonder is called “The Whale’s Tail” and amazingly is located right in the middle of a whale watching area.

Now retirees and others in Costa Rica can do their part to help preserve these beautiful cetaceans. From the fourth of April until the 23rd there will be a series of exhibits sponsored by La Fundación Albatros Medio will take place in Costa Rica to raise the awareness of the whale’s plight as an endangered species. Countries like Japan, Norway ad Iceland continue to hunt whales indiscriminately. The exhibits will be held in San Jose’s Parque Central (Central park) and at the Multiplaza malls in Escazú and Zapote. There will also be another exhibit in Puntarenas starting April 25th. Several Costa Rican organizations like the Banco Nacional and Florida Ice (beer and beverage company) will help sponsor these exhibits.

The exhibit consists of over 100 photos that provide information about whales in general and the practice of hunting them. The events at the malls will feature several documentaries which will be projected on screens. One of the documentaries is about whale watching in Costa Rica.

Retirees or anyone else who attends these events can sign a petition to help the whales. The goal is to create a sanctuary in the south Atlantic and to protect whales form being hunted by the countries mentioned above. After visiting Costa Rica the exhibit will move to Colombia.

Christopher Howard conducts monthly relocation/retirement tours fill in the form below to receive Chrisopher’s free book when you register for a tour and have him contact you personally. For details please see: www.liveincostarica.com. He also has authored and published 17 editions of “The New Golden Door to Retirement and Living in Costa Rica” and other guides about living in Costa Rica. See www.costaricabooks.com

Parts of this article was originally published in Christopher Howard’s blog at www.liveincostarica.com/blog