Costa Rica News – It is quite obvious that the Costa Rican government does not give a crap about keeping its rivers and environment, other than when it is required to act.  It seems we have another example of gringos trying to keep Costa Rica environmentally friendly. 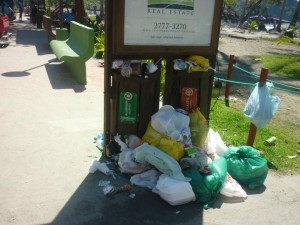 Environmental awareness is important for the whole world. In the USA kids are educated about recycling from a young age in school and adults are fined for not recycling properly. Costa Rican’s are just as smart and capable but there is simply not a country wide recycling program nor is there much education about its importance. The idea is scattered here and there but is not being truly implemented. An example of the normal recycling effort is in the picture to the left.

Two residents of Albany are helping to change these facts. As Peace Corps volunteers in Costa Rica one of their duties is to promote environmental awareness. Stephen and Melinda Lanning went to 200 households in their Costa Rican community to educate people about the importance of recycling. They also organized an effort incorporating how and where to recycle. The residents were taught how to separate organic waste, garbage, and recyclables.

Following the projects training phase, one-third of the homes continued regular participation! The reason the other two-thirds did not is mainly because of lack of receptacles for separation and storage of recyclables. For this reason the Lannings started raising money for recycling bins. They used the money to make bins out of simple wire, plastic, and rope. In addition, green spaces have been created to house recycling bins in local parks, eco-lodges, and soccer fields.

Environmental responsibility needs to be ingrained in the population not just in Costa Rica but the world.  In many developed nations it is realized that the consequences of pollution are going to effect you directly.  The attitude in Costa Rica for many is represented in the below interaction I had with a local Costa Rican on the bus.

She threw a plastic bottle out the window of the bus and collected along with all the other trash on the side of the road.

Me – “Why did you throw that out the window, it destroys the beauty of this country?”

Tica – “It does not matter if I do it…….everyone else does it so by me stopping polluting it does nothing.”

This attitude is why after Costa Rican holidays like Semana Santa or the other bi-weekly holidays they have in Costa Rica, that the beaches are covered in garbage.  In most cases it is not the tourists polluting and throwing their garbage on the sand, it is the local Costa Ricans.