I like Christmas lights and snowy nights as much as the next person. But the foo-foo of the fictional baby Jesus has nothing to do with the real teacher and his mission. 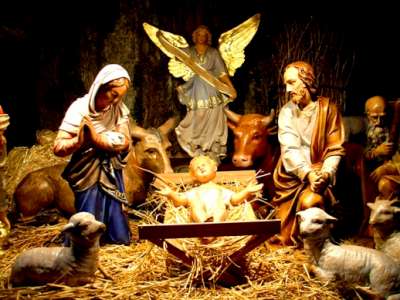 Raised severely Catholic but leaving the Church at 17 without looking back, I hadn’t seriously thought about Jesus in 25 years. Then, while recovering from a life-threatening illness, a Chinese woman, who had escaped China in the 1960’s, approached me in a small park across from Apple Computer headquarters in Silicon Valley, where I lived that the time.

Her English was only fair. Even so, when she said, “I’m the Buddha,” I must have given her a look of such incredulity that she immediately said, “I’m not crazy.”

What do you mean? “That the Buddha spirit flows through me.” In fact there was a fierce clarity about her. Despite her diminutive stature and advanced age, her voice boomed like thunder at times. So I listened.

She told me the harrowing story of how she escaped Mao’s China during the brutal Cultural Revolution, when young people were incited to rise up and turn against their parents and teachers. Millions were killed or interred in ‘re-education’ camps.

She told how got cold feet on the dock awaiting the ship that would take her to America, but felt a hand push her forward from behind. Turning, there was no one there.

Then she began speaking about the Buddha and Jesus as if they were real human beings—indeed, as if they were present. Regarding the latter, the human being she spoke of bore no resemblance to the deified “Son of God” with which I’d been inculcated.

Forgiveness was the strongest quality she conveyed about this Jesus, which fit with what little I remembered of my childhood catechism. This was a forgiveness born of acceptance, understanding and inner peace however, rather than from the priestly bestowing of absolution, or the self-conscious act of mercy and clemency many Christians profess.

Between the serious illness and a fight with my mother during the last visit to my home state, I had completely forgotten it was her birthday. Mother had rifled through my things when I was there, and anger had become lodged in my heart.

After the Chinese woman and I spoke in a very human way about Jesus, my anger spontaneously dissipated. I remembered that it was mother’s birthday, and called her when I returned to the apartment.

It surprised me when mother wept. Now that she’s dead, I’m grateful for that life-changing encounter with an old Chinese woman in Silicon Valley, from a bad time in a strange land.

After this encounter, I didn’t become a Jesus person, but I did begin questioning what he was really about and what really happened to him.

Did Jesus know he was going to die when he triumphantly rode a donkey into Jerusalem, signifying the fulfillment of the prophecy of a messiah? What is a messiah, and is there such a thing? Why did the Jewish leaders condemn him, and turn him over to Pilate to be put to death?

I still have trouble with the entire concept of a messiah, which is defined in two ways, signifying the confusion behind the word. The first definition, historically, is “the promised deliverer of the Jewish nation prophesied in the Hebrew Bible.”

Because he was crucified, and his mission failed, Jews did not and do not consider Jesus to be their messiah. Without going down the wretched “Jews killed Jesus” road, perhaps he wasn’t their messiah because the Jewish leaders of Jesus’ time had him crucified. Kind of the ultimate theological

The whole messiah business notwithstanding, clearly something went terribly wrong after Jesus entered Jerusalem during Passover that fateful season. Like thousands of others before and after him, Jesus ended up nailed and roped to Roman cross.

Turning the failure of his mission (Jesus’ crucifixion) into the purpose of his mission (“he died for our sins”) was a theological masterstroke. But it left a chasm between the historical Jesus and the fabricated deity of the Roman Catholic Church and its Protestant spinoffs.

If Jesus were alive today, would he be a Christian? Hardly. Their leaders would probably have him killed again.

Siddhartha’s act of touching the Earth in response to Mara’s challenge dispelled darkness and evil because nature and the cosmos are the manifestation of an immanent intelligence. He was simply saying, from tremendous depth, ‘I am one with this, and That.’ So was Jesus, and potentially, every human being.

The root meaning of the word sin is synonymous with mistake. Sins are just mistakes of a deeper kind. True forgiveness begins with oneself, for we all have darkness within us, have all made mistakes, have all, in the old vernacular, sinned.

The best gift we can give this holiday season is forgiveness, of ourselves and others.

Hotels for You & Your Pets in Costa Rica