Costa Rica News – Renate Herberger is a self-described Pagan who sings to the African goddess Yemaya for permission to enter the sea before each of her long-distance swims. Yesterday, she swam 1,100 kilometers along the endless Pacific. 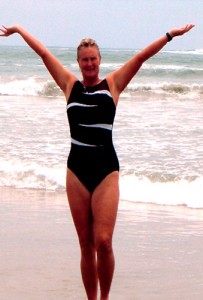 Herberger said, “I hear about these Mt. Everest climbers. For them, it is man against nature. For me, it’s the opposite. I don’t fight the ocean. It is has a sweetness to it. The longer I swim, the quieter my mind becomes.”

She has swum the length of Costa Rica’s Pacific coast six times before and this seventh swim will be her last in the country. She does it to raise awareness for a variety of aquatic concerns in many areas, namely sea turtles, wild salmon, and, in Costa Rica, the dying coral reef.

Herberger is a native of Germany who is trained in dance therapy, works as a kayak guide, and speaks five languages. She’s 55-years-old. “If things went wrong in my life, I would have a swim,” she explained. She suffers blood clotting in her legs and aquatic sports act as therapy for the condition. “I must swim every day,” she says, “or else I become very sick.”

She travels through Costa Rica with only a backpack and an aide who kayaks next to her to give her water every 30 minutes. She often stops to speak at schools or other community locations. She exchanges free housing with teachers or uses money from sponsors to travel for free, most of the time. After doing the trip 6 times, however, she has lost some sponsors and doesn’t have as much generosity offered to her. She has to use a credit card with a limit of $10,000.

Herberger recently got injured on a waterslide in Mexico, breaking a rib and tearing tendons in her arm. “It’s so ridiculous. It’s so stupid. I’ve swum 6,420 kilometers so far! I’ve swum with sharks! I’ve swum with whales! But that stupid, stupid waterslide,” she says. Nonetheless, she returned to Costa Rica for the final promised swim for awareness.

Check out Her Blog Here.

Tom Prousalis, The Washington Post & The Wolf of Wall Street