Costa Rica Entertainment – Rebelution will be performing in Costa Rica for the first time ever with local reggae sensation Ojo de Buey at the first annual Reggae to the Rescue this summer. Sponsored by Arizona Iced Tea, the day-long event is going down July 16th, and will take place at Patrons Bar and Grill which is located in downtown Dominical near the shores of the Pacific, alongside some of the most consistent waves in Central America. 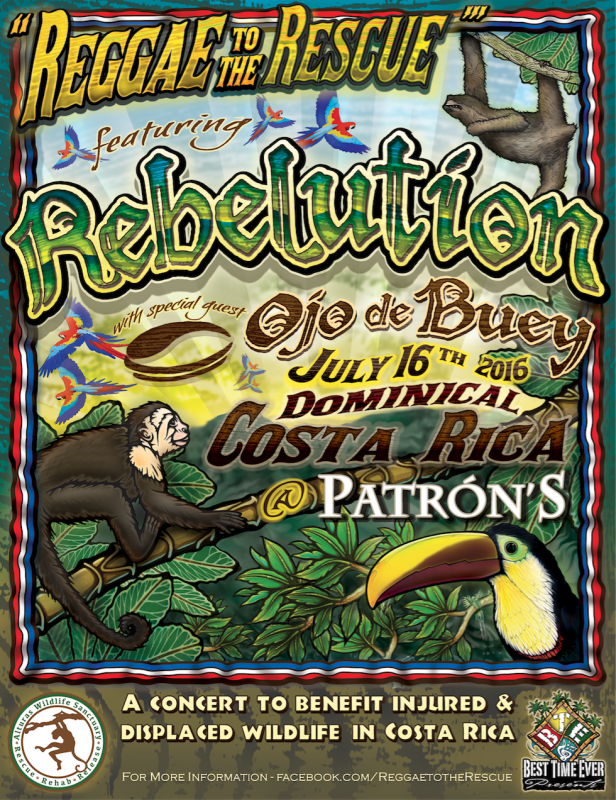 The goal of this benefit concert is to use the positive vibes of reggae music to foster a community that will help raise funds for Alturas Wildlife Sanctuary, a non-profit organization, so they can expand their facilities and hire much needed staff. 100% of the funds raised from the event will be donated!

Alturas Wildlife Sanctuary first opened its doors to distressed animals in December 2014. They ascribe to the philosophy “Rescue Rehab and Release” and have re-introduced over 100 monkeys, toucans, sloths and other exotic animals back into nature.

“Everyday we see more and more animals that have been injured or displaced. Our staff is working around the clock to care for and rehabilitate the animals that are brought to us. With over 100 animals currently at the sanctuary, and more coming everyday, it is our mission to provide care for every single animal that comes to us. We are continually expanding the facilities and growing our team to handle the demands, but we need your help in order to make our mission a reality,” explains Executive Director Tom Rademacher in a press release. More information about Alturas Wildlife Sanctuary can be found here.

Reggae to the Rescue will be in the middle of Rebelution’s “Falling Into Place” tour, which kicks off at historic Red Rocks Amphitheater in Morrison, Colorado on June 6th. The trek takes the band across the US for twenty-six dates, finally ending in Missoula, Montana on August 20th, before they head over to Costa Rica for what is sure to be one of their most special shows to date. Find out more on the band’s website.

Hailing from San José, Costa Rica, Ojo de Buey has made their name in the scene by providing the earthiest of reggae vibes to Central America, also performing alongside some of the nation’s leading acts, like Rebelution andDirty Dozen on the stages of North Coast Music Festival.

Hosting Rebelution and Ojo de Buey for this benefit concert is only the beginning of Reggae to the Rescue’s efforts! Tickets are currently on sale for $25 USD here, with a limited number of VIP tickets available as well. Whether you’re already in Costa Rica, plan to visit there, or have always wanted to, now might be a really great time to make the plans. For a good cause!

From Live for Live Music