World Entertainment News – Many women in the world and young girls now play with or have played with a barbie doll.  This probably goes for a lot of Costa rican guys in private as well….it’s ok we will let you have your secret. 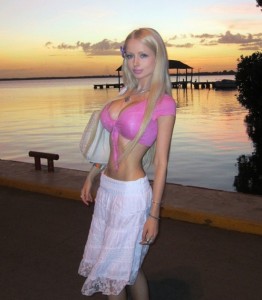 Last year, the Internet found its true purpose by making micro-waisted, hypermammiferous human Barbie Valeria Lukyanova a viral sensation. For those not familiar with the remodeled, doll-eyed blonde, think of her as the Ukraine’s answer to Paris Hilton, only weirder, phonier, creepier and far less useful to society.

Valeria’s commitment to body modification has now earned her a VICE documentary called “Space Barbie,” which proves to be 20 long minutes of are you friggin kidding me.

“What most of the world doesn’t know is that Valeria is not a real girl at all,” explains the magazine, “but a time-traveling spiritual guru whose purpose is to save the world from the clutches of superficiality and negative energy.”

Of course she is. It makes perfect sense that humanity’s savior would alternate between being a plastic plaything with gigantic, anime eyes that can eat our soul and a bearded, “Exorcist”-voiced time-traveler named Amatue who can see “different spirits from other dimensions.”

Other than the “beautiful” and “inspiring” part, she has a point.

The documentary mainly focuses on Lukyanova’s spiritual mumbo-jumbo, although it does touch upon the backlash her unnatural looks have caused. She denies rumors that she had a rib removed to whittle her waistline and proudly displays her pillowy cleavage.

“Even though people call me Barbie, I never tried to look like a doll,” she insists. “I just like everything beautiful, feminine and refined.”

Watch the documentary below and pray for civilization …

By Pop_Spy, edited by Dan Stevens

Sailing the Waters of Costa Rica