Phones and Resistance to Change in Costa Rica

My friend bought a phone in some little tienda a few weeks ago and gave it to me as a gift for teaching her little boy a little English. It cost her less than twenty bucks. We are ‘studying,’ me and my soon to be tri-lingual estudiante, a popular song that everybody here knows and sings. Only they sing it not with the real lyrics- as they are in English- but they do it with gusto anyway. My charge, will be able to when we’re done, be one-up on his peers by actually knowing what the song’s about. But back to my phone. 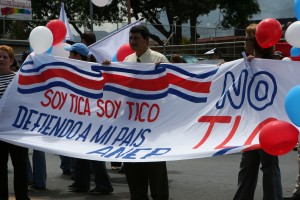 When I first came to this country in 2005 a friend of a friend had an ‘extra’ line that he would sell to me. You see, at the time foreigners were not legally allowed to have private telephones, and the monopoly by ICE created an underground market. In other words the government was creating a criminal class- albeit a small crime and one that was ignored by the authorities- but it encouraged Ticos to break the law by reselling government assets. They might even be selling to someone who might even be breaking the law further. Drug kingpins needed to come into contact with the average Tico just like a normal person like myself would have to.

Also when I came here in 2005 I ran into a protest in front of the American embassy in Pavas. Big paper mache heads depicting the ever evil Bush and gods know who else. It was a small crowd and pretty pathetic as far as I was concerned. The police outside the embassy looked pretty bored and posed for pictures. They were protesting the TLC, or as we knew it up north: CAFTA, or, the Central American Free Trade Agreement. That same agreement, that when finally approved 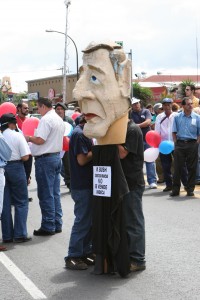 by both countries, ushered in the modern day of cheap and readily available telephones for everyone.

The hue and cry was the same crap one hears in nearly every Latin American country whenever the U.S. in involved in anything: the gringos were coming to take over the holy and sovereign State and trample the poor. As Costa Rica was to benefit far and beyond anything gained by the U.S. by ratifying the agreement I was more or less amused. I watched and listened to the demagogues to see what arguments took hold until I left the country and more or less forgot about it. Thankfully, for the Ticos, enough of them had sense or enough big-cheeses were looking to have their pockets lined that the agreement was ratified by both countries.

I’m sure more than a few people resent the fact that they can’t sell their extra lines to gringos and other foreigners for a few extra bucks, but the fact that they can just jog down to the local tienda and buy a phone in five minutes and start making calls instead of being held hostage to ICE surely makes up for it. I’ll save the story about how my phone was stolen from my car and the three days it took to track down my original seller, spend the day at ICE and of course actually buy a new phone.

For now we will just welcome Costa Rica to the twentieth century.

A New Foundation for Humanity