A New Foundation for Humanity

There is a great paradox to human evolution. It took billions of years to evolve a brain with the capacity for awareness of the sacred, but employing time prevents the realization of that potential. 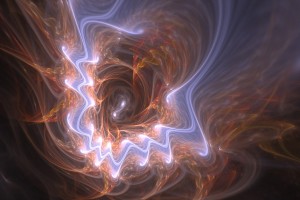 Most people believe, consciously or sub-consciously, that man is either made in the image of God, or man is incapable of changing. Indeed, some people (called Republicans in the USA) hold both views at once!

The first thing we have to admit is that consciousness is not ‘evolving.’ Consciousness as we know it cannot evolve; it can only accumulate. And by psychologically accumulating experience over thousands of years (but most egregiously over the last generation), content-consciousness has deteriorated and darkened to the point of threatening to spiritually suffocate the human species.

Except for the titillations of science and the toys of technology, man is declining, and quite rapidly. Increasingly disconnected from nature since the Industrial Revolution, the accretions of the past are now eroding the essence of what it has meant to be human since time immemorial.

Though denial still rules with a gold fist in America, man is in the process of throwing the climate completely out of whack, and wiping out half the animals with which we share the earth. We are on the brink of a nuclear arms race that will make us nostalgic for the Cold War. And famine, disease, and terror, already at obscene levels, are poised to make quantum leaps.

A leap of consciousness is required simply to preserve what is left of the richness of ecological and cultural diversity, 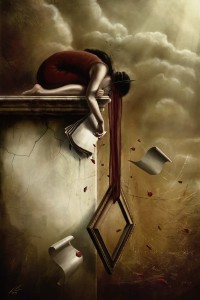 much less to enable the next generation to grow into human beings.

Though that appears unlikely at this point in human history, the worse things get, and the more self-destructive man’s self-made global society becomes, the clearer the imperative for radical change in consciousness. Short of that, the man-made momentum of division, fragmentation, and self-interest will continue to grow, and overwhelm the best-laid policies and plans.

A sentient species is one that is conscious of itself. As such, humans are probably the only sentient animals on earth, though other species, such as chimps or dolphins, seem to be capable of self-awareness in a rudimentary form. With sentience also comes responsibility, and the capacity for self-knowing and self-transcendence. Humans are the only animals on earth with that potential, the realization of which has now become vital to our survival as a species.

The human brain is dominated by the functions of symbolic thought. That is, we live by words, images, beliefs, traditions, and opinions—in short, our incessantly fragmentary conditioning. A self-knowing human being, on the other hand, is aware and no longer dominated by his or her conditioning, and therefore moving in the direction of insight and liberation.

At bottom, symbolic thought rests on ‘the ability to remove and make ready for use.’ That’s the literal definition of separation, the fundamental attribute of thought. There are no ‘things’ in actuality, and therefore without conscious thought, there can be no complicated mind-to-hand or mind-to-mind manipulation. (Though our closest cousins, the chimpanzees, also have cognitively developed enough to demonstrate a basic bloodlust, an all too human capability for primitive war and genocide.)

Symbolic thought is the most powerful adaptation that has ever arisen on earth. It is so powerful that it is impossible to believe that it could have only arisen on this planet alone. 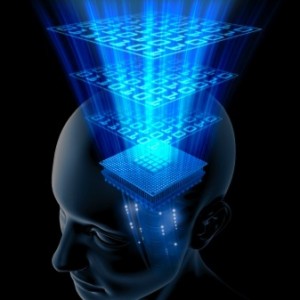 Certainly the misnomer ‘intelligent life’ on earth is not unique to one planet out of billions in our galaxy alone. It’s man’s hubris to think that there aren’t other sentient species that have successfully or unsuccessfully passed through the same crisis of consciousness that we humans, using ‘higher thought,’ have generated on the earth.

Used unwisely, as it most certainly is by humans, symbolic thought becomes inimical to life. As such, I propose that ‘higher thought’ generates a growing existential crisis for all species in which it evolves, on earth or any other planet.

In the end, perhaps the evolution of symbolic thought is a crucible for true consciousness. Perhaps species in which conscious thought evolves are compelled to either awaken a growing insight into themselves and content-consciousness, or they perish from the universe. How close are humans to that precipice? Too close for anyone’s comfort anymore.

The true balance of the religious and scientific minds is not in some fantasy of co-existence between faith and fact. Rather, it’s in the individual’s seeing within themselves the place of the mind-as-thought (of which science and art are the highest expressions), and the primacy of the mind-as-stillness and insight.

The human brain is the ‘pinnacle of creation’ only when it negates the movement of thought, ends psychological time, and is completely still. Otherwise, dominated by divisive thought, it just generates more and more fragmentation and chaos.

Every human being has the capacity to feel the silence, sacredness, and creativity that permeate the universe. That’s the new foundation we can continually pour within ourselves, so that we may manifest and build a world that begins to move in the direction of harmony with nature and each other.

Phones and Resistance to Change in Costa Rica

This article is full of so much bs doublespeak as well as uninformed infantile assertions that I feel a little sick. I thought this new age crap was flushed for good back at the turn of the century. A “new foundation that we can continually pour within ourselves”? Please explain wtf that means.

That man is perfectible is the idea behind history’s purges when enemies of the state were deemed lacking in sufficient charater. For the heck of it start with the reign of terror during the French Revolution and end up at the enforced public grief upon the death of the erstwhile North Korean dictator. That man is imperfectible is the reason why we have the modern concept of the rule of law applicable to King and serf alike. Nobody’s perfect. The rest of the above blather is just that.

another self-hating misanthropist spews forth.

Ah,yes, project much? Whereas I criticized the message you criticize the messenger. Point out the flaws in my critique instead of attacking my character. And thanks for making my point. I’m guessing I wouldn’t cut the mustard in your imagined utopia.