Costa Rica News & Entertainment – The Simpsons, Francisco Pizarro, Alberto Fujimori, prisoners, terrorists, and military personnel are all characters in Marcel Velaochaga’s eight acrylic paintings that will be showcased in the National Gallery’s “Tales from Peru.” 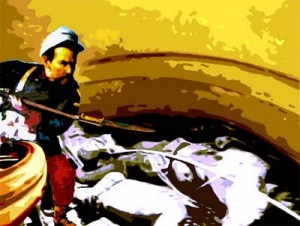 One of his works, “Living in Peru,” is based on Roy Lichtenstein’s “Interior,” but the original mirror is replaced by a terrorist group, Sendero Luminoso. His works are similar to the political posters of the ‘60s, in that they use intense flat design with false colors, meaning the artist changes a blue for a red, and so on.

The artist explained that first he does the drawing and then he paints the dark tones. The parts that look black are actually a mix of green and red. He never uses the color black. He paints in at least three layers. He describes his painting like this, “It’s inside the new figuration or narrative figuration rather than American pop, but I use some elements such as planes. I am a historical painter and I paint for people to simply remember.”

The show’s curator, Eugenia Abadía, said, “Tales from Peru is a confrontation between plastic and history. Marcel gives us a picture of Peru different from the official one, with characters in impossible scenarios, but that evoke the horrors of violence and colonialism.”

To see this award-winning artist’s work, that points to colorful myths, realities, and tragedies, visit the National Gallery by February 23rd.