Costa Rica News – This is something that if they are able to implement it correctly is actually a decent idea.  Must have been presented by someone that is actually able to think outside the box.  The big question always is will the idea be implemented efficiently without any hiccups. 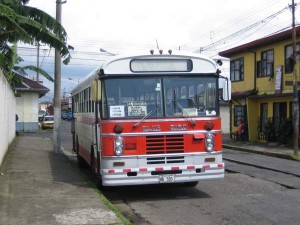 Get on the bus pay the fare by  phone will become a reality for several bus routes in the next two months.

The Public Transport Council (PTC) and the Electronics Research Corporation company (Ciesa) have tested the system for two years and say they are ready for implementation.

Jorge Sanabria, president Ciesa who developed the system, said it is a chip that is placed in the cell, called TAG. You will also be able to use an electronic card.

Both can be purchased at the Banco National and  grocery stores. The two devices are free and must be recharged for at least 6000 colones.

“The person can choose either the TAG for the cell or the electronic card. This is immediately recharged and you can use it on the buses, “said Sanabria.

He added that a passenger traveling on routes other than those mentioned may use the card without problems on one route to another.

Sanabria added that they are working to finalize a deal with a the cellphone company, allowing you to earn the passenger minutes on their prepaid phone buy using this bus card system.

ADHD in Kids Up 24% in Last Decade

The Politics of Gender