Ghosts & The Supernatural – The start of Truckee came about in 1863 with the arrival of Joseph Gray – an Englishman that erected a stage station near present day downtown Truckee. A disastrous fire engulfed the town of Truckee in 1869. The town was built almost overnight. In 1909 a four alarm fire hit the Truckee Hotel and many lives were lost. William Atkin was running down the stairwell and broke his neck. His ghost is said to still haunt the Truckee Hotel. 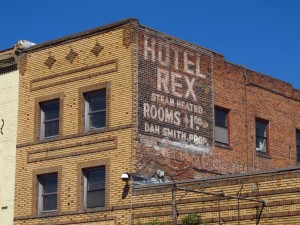 There was a Masonic influence in this town that was inhabited by miners, gamblers, brothel owners, prostitutes, cattle men and Chinese workers. In 1886 there were at least 2000 Chinese workers that worked in the Truckee Basin. They risked their lives for substandard wages. Legendary gun duals occurred at Truckee by Carrie ‘Spring Chicken’ Pryor vs. Jack Whipley in front of the Front Street saloon. Not long afterwards another gun battle occurred between Lotta Morton – Brothel Madam vs. Belle Butler. This duel happened on 4th of July and remembered by the citizens of Truckee for a long time to come.

A vigilante group came together that wore black masks and they called themselves the ‘601’. Great lawmen of Truckee had to get order back in this town, men like Jacob Teeter and A.F. Schlumpf, especially when stories were told that stagecoach robber Black Bart was in town. Famous people came to Truckee such as Charlie Chaplin, Paul McCarthy, Jack London. In fact Charlie Chaplin once stayed at the Truckee Hotel and Paul McCarthy (of the Beatles) visited the Truckee Hotel. The town of Truckee is a historical hotspot for tourists and the historical ambiance of the town can be felt everywhere.

Some History and Highlights of the Truckee Hotel:
The Truckee Hotel was originally the American House in 1873. In 1875 Stewart McKay purchased the hotel for a mere $2,364.71 and re-opened it as the Whitney House. The hotel during this time period served as a stagecoach and overland train stop. The Truckee Hotel had many name changes from Hotel Blume, Riverside Hotel and the Alpine Riverside (for the 1960 Olympics at Squaw). The hotel has been around for 130 years and tourists still flock to this enchanting hotel.

Reported Activity at Truckee Hotel: Activity in the room is lights that flicker off and on.
Truckee Hotel caught on fire 4 times. Many lives were lost in 1909 fire.
People experience showers turning off and on by themselves.
Kidnapped girl apparition is seen on the 4th floor.
Creaking floorboards and sounds of walking down hallways are heard. 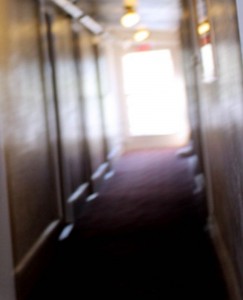 Impression of ghostly bodies on beds are seen, as if someone is lying on the beds.
Basement: Hotel employees feel negativity in basement. Renee, Chantal, Julie and Tammy took tour of basement and Renee was touched on the buttocks by an unseen force.
4th floor bathroom: A little girl was murdered in this bathroom. Little girl apparition has been seen running down the hallway and stairwell laughing hysterically. (Picture to right shows little girl coming out of the wall)
A man shoots his wife in the room that Shannon is staying in. This man that killed his wife went to Moody’s to buy everyone a round of drinks and was arrested on the spot by police.

Reported Activity at Truckee Jail:Ghostly inmates are felt or seen sometimes by people who tour this old jail. Renee Martine captured 3 possible EVPs in the jail that sounded like a man’s voice growling.
Reported Activity at Kruger-Whitehouse Built in 1874: Piano music has been heard in this building and there is no piano. A disembodied entity was once seen by a customer. The customer was very frightened and ran out of the establishment. A child once fell out of the second floor window and sometimes customers see a small child apparition in the building. Table and lamp may have vibrated during the presence of investigators/scouts.

Reported Activity at Truckee Cemetery: The cemetery is haunted by a man (I will call Chainsaw Sam) that committed suicide by a chainsaw. Somehow he lodged himself underneath his car and placed the chainsaw on his torso. For what reason, I don’t know.

Reported Activity at Gioielli Jewelry and Gifts and Bead Store: This building was once a gambling casino and on the 3rd floor back in the 1800s a cowpoke was shot to death for cheating at a poker game.