Open Pit Mine Still Up in the Air (Delayed for Gastritis)

San Jose, Costa Rica – A hearing in the criminal defamation case filed by Canadian based mining company Industrias Infinito S.A. against three members of the Crucitas de San Carlos has been suspended due to illness. Industrias Infinitos has also filed a civil action claiming damages of 500 million colones. 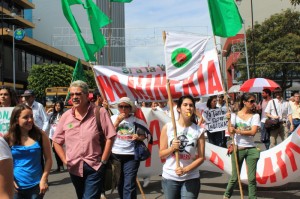 A lawyer for Industrias Infinitos, José Luis Ocampo Rojas, was said to be taken ill due to ‘acute gastritis.’ An unidentified lawyer for the defense quipped, “It must be hard on the health to defend this company because the same thing happened to another lawyer Juan Carlos Obando caused another hearing to be suspended back in 2010.”

Others speculated that this was a ploy on the part of the defense to await the results of another hearing in front of the Constitutional Court concerning the cancellation of the permits needed to continue with the proposed open pit gold mine three miles from the San Juan River near the Nicaraguan border. That case stemmed from two earlier lawsuits against the State of Costa Rica and Industrias Infinitos that determined to nullify permits issued by the government of Oscar Arias.

In those two cases, one before the Sala Primera and the other before the Tribunal Contencioso Administrivo, there was an apparent leak in one of the cases that required the higher court to get involved. The TCA also referred its ultimate decision to the Ministerio Público to determine if criminal charges may be in order against Arias and various other officials.

The high court hearing happened in November of 2011 and it is speculated that a decision will be handed down soon. The outcome there may well determine the direction of the current cases as a positive outcome for Industrias Infinitos would offer an opportunity for further development of the proposed mine. A negative outcome may cause the company to withdraw from one or both of the current cases.

Related to all of this two government officials were removed from their post after an investigation by the Civil Service this past month: Cynthia Chinchilla Cavalini, the now former head of the Mining Registry and Francisco Castro Muñoz, the now former Director of Mines and Geology.

Foreigner Found Dead on the Street in Golfito