Foreigner Found Dead on the Street in Golfito

May 28th, 2012 – A man approximately 35 years old and speculated to be either Colombian or Panamanian was found face down in the street with five bullets in him. A phone call alerted police to the El Chorro section about two kilometers outside of the town of Laurel. 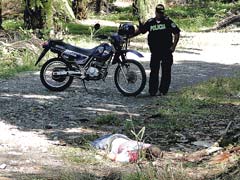 The body was found around 9 AM and suffered at least one shot in the face. The oil palm plantation where he was found is an isolated area without much traffic and it was determined that the victim had been dead about five hours when he was discovered.

According to officer Edgar Lara of the Fuerza Pública, “The victim was already dead when we arrived with his clothes covered in blood and had no identifying documents. An investigation will now begin to see if he can be identified.”

Several police units converged to secure the crime scene as neighbors and others began to congregate and possibly compromise it. Agents of the OIJ removed the body to the morgue for an autopsy. Police say that because of the manner of killing it could be linked to revenge and so far cannot determine if the crime was committed there or if it was elsewhere and the body was just dumped.

The Border Trail (Another Government Screw Up)

Open Pit Mine Still Up in the Air (Delayed for Gastritis)

To the editor could you please put (time stamp) a date and time on this so we know when!

Added the date, and the time of finding the body per the reporters was 9 AM. Thanks for reading.