San Jose, Costa Rica – This year there have already been 2,237 patients that have been diagnosed with dengue fever. This does not include those that did not make it to the hospital or doctor’s office.  The struggle that the health authorities undertake with dengue has been hampered by the large number of old tires dumped in backyards and vacant lots, which serve as breeding grounds for the mosquito transmitter. 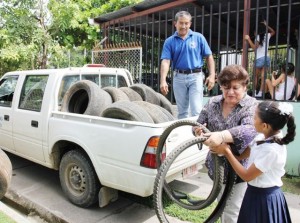 For example, last week, the Ministry of Health collected 3,000 tires in the province of Guanacaste, many of which already had the mosquito breeding Aedes aegypti , which transmits dengue.

More than 8,000 tires have been collected so far this year, said Health Minister Daisy Corrales, who described them as “a five star hotel” for mosquito breeding.

The chief noted that it is the responsibility of individuals and legal owners of vehicles carrying old tires to collection centers, as so requires the waste regulation issued by the Ministry.

However, the amount of discarded tires is not unique to Guanacaste, just a month ago 4,000 of them were collected in the Caribbean and a similar number in Puntarenas.

Similar Conferences held in the coming weeks in the regions Brunca Huetar North and Midwest.

The minister explained that although the tires are most often the mosquito breeding sites, collecting all kinds of garbage in vacant lots and backyards is critical.

According to authorities, a bottle, a jar or even a car of soda are ideal sites for the water and then mosquitoes that transmit the virus put their eggs there.

The recommendation needs to happen with strength because we are still awaiting the most intense phase of the rainy season.

Symptoms of dengue include fever and headaches and joint pain, and some skin rashes.

Data provided by the Ministry of Health indicate that 2,237 people have suffered from dengue this year.

Of that total, 1,726 cases were treated in the Atlantic region. Next in magnitude the central Pacific region with 331 cases and Chorotega, with 284, said the Department of Health Surveillance.

As for 2011 to this date there were fewer cases, but neither this year nor the last year compared to the number of people infected in 2010, when there were over 12,000 cases of dengue.

Its more than this. Take a look through the city and the towns surrounding . Litter and debris reside everywhere. Costa Rica touts a nation of Green to the outside world community, but in its interior it wreaks of stench from the trash that come from the irresponsible acts of its citizens. My wife and I are going to start cleaning certain areas as we find time. Some one needs to take the lead. If you get a chance, please do the same. Lets contribute something positive to a beautiful country