A tornado at least a half mile-wide with 200mph winds churned through Oklahoma City’s suburbs Monday afternoon, killing at least 51 and causing significant property damage for the second day in a row, forcing rescue crews to search for survivors in the debris of flattened homes, businesses and two schools. 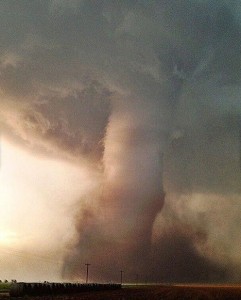 Amy Elliott, a spokeswoman for the Oklahoma Medical Examiner’s Office, said the death toll is expected to rise. Oklahoma City Police say seven of those deaths were children at Plaza Towers Elementary School, which was hit by the tornado, Fox 25 reports. Oklahoma police also told Fox News’ Casey Stegall, on the ground in Moore, Okla., that at least four people were killed at a 7-11 convenience store.

Television footage on Monday afternoon showed homes and buildings that had been reduced to rubble in Moore, which is south of Oklahoma City. Footage also showed vehicles littering roadways south and southwest of Oklahoma City.
OU Medical Center spokesman Scott Coppenbarger said the hospital and a nearby children’s hospital are treating approximately 85 patients, including 65 children, with conditions ranging from minor injuries to critical.

Integris Southwest Medical Center spokeswoman Brooke Cayot said 10 of 37 patients being treated at that facility Monday are listed in critical condition. Twelve are in serious and 15 others are listed in fair or good condition.
Cayot said five of the patients at Integris are children, including two who came from the Plaza Towers Elementary School.

Search and rescue crews are now looking for anyone who may be trapped in the rubble. Aerial flyovers showed crowds of residents picking through debris Monday afternoon, while one resident told Fox News that children were trapped under cars at an elementary school.

Oklahoma Gov. Mary Fallin said in a news conference that “hearts are broken” for parents wondering about the fate of their children, and search and rescue efforts will continue throughout the night.

Briarwood Elementary School in Moore, one of two schools hit, suffered “extensive damage,” according to Gary Knight with the Oklahoma City Police Department.

At the Plaza Towers Elementary School, students were hugging and clinging to the walls of the school as the tornado passed over, KFOR reports.

An Associated Press photographer saw several children being pulled out of what was left of the school. The school’s roof appeared mangled and the walls had fallen in or had collapsed. 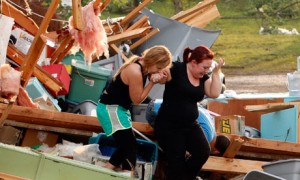 set up in the school’s parking lot.

While the tornado was passing over the school, students were hugging and clinging to the walls, KFOR reports. There are 24 students believed to be in the rubble at the school, but the report could not be confirmed.

A Norman, Okla. regional health system spokesperson also told Fox News that Moore Medical Center, the only hospital in the city, also suffered “extensive structural damage,” as the tornado demolished the second floor of the hospital and tore off part of the roof.

The center evacuated 30 patients to two other hospitals in Norman, Okla.

The National Weather Service said the tornado was on the ground for nearly 40 minutes, with the first tornado warning coming 16 minutes before it touched down. The preliminary damage rating on the enhanced fujita scale was EF4 — the second most-powerful type of twister — and carved a 20-mile path through Newcastle, Moore and South Oklahoma City.
Oklahoma City Police Capt. Dexter Nelson said downed power lines and open gas lines now a risk for rescue teams in the aftermath of the system.

The Oklahoma Department of Transportation closed I-35 in both directions near Norman, Okla., to assist with cleaning up the debris.

“This is absolute devastation like nothing I’ve ever seen before,” Betsy Randolph, with Oklahoma State Police, told Fox 25.” This may be worse than the May 3rd, 1999 tornado.”

The strongest winds on earth — 302 mph — were recorded near Moore that year.

On Monday night, President Barack Obama spoke with Oklahoma Gov. Mary Fallin to express his concern for those impacted by the storm. Obama said FEMA is ready to provide all available assistance as part of the recovery.

In advance of the storm, the Oklahoma House of Representatives stopped work so Capitol employees could take shelter in the basement. Television and radio broadcasters urged residents to take shelter because the storm’s strength and size.
The Storm Prediction Center in Norman had predicted a major outbreak of severe weather Monday in Arkansas, Kansas, Missouri and Oklahoma. The National Weather Service has also issued tornado watches and warnings for counties in Missouri, Nebraska, Arkansas, Oklahoma and Texas.

On Sunday, at least two people were killed and 29 were injured in Oklahoma as a severe storm system generated several tornadoes in Kansas, Oklahoma and Iowa, leveling neighborhoods and sending frightened residents scurrying for shelter as extreme conditions are expected to linger across the Midwest.

The tornadoes, high winds and hail have been part of a massive, northeastward-moving storm system that has stretched from Texas to Minnesota.

Regarding Conduits and Vehicles