Costa Rica News – An advance mission of 40 officials of the U.S. government are coming to Costa Rica on Thursday to prepare for the arrival of President Barack Obama  on Friday, May 3rd. Let’s hope both the advance team and Costa Rica is on its best behavior. 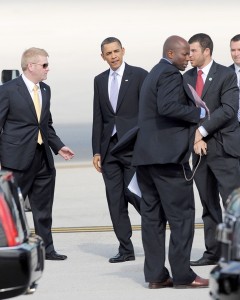 The arrival of officials will pave the way for the U.S. president to come to the country to attend the summit of the Central American Integration System (SICA) , scheduled for May 4th.

The visit has been planned for months between the governments of Costa Rica and the United States. There is currently has no provided agenda, but they are expected to clarify details with the advance team, which would be in the country between Thursday and Friday.

“We have several options (for hosting the event), but part of the job of the delegation is to visit the various options and make a decision of where President Obama will to staying the president,” said the Communications Minister. The best guess based on previous summits and important dignitaries coming to Costa Rica is the Intercontinental Hotel in Escazu.

The White House has just reported that Obama’s visit will be to discuss development issues and public safety, as well as the issues of migration, climate change, natural disasters and clean energy with the Costa Rica government.

The US President, a modern day version of Emperor Augustus or perhaps a Louis XV would be closer. .
Wonder if he has a food taster too to insure POTUS is not being poisoned?