Costa Rica News – As the population of Costa Rica and the governmental bodies of this country sit down in their respective homes this evening, they will begin to reflect on the a little over 24 hour visit from President Barrack Obama.  Although not likely, hopefully they will see through the smoke and mirrors of this visit. 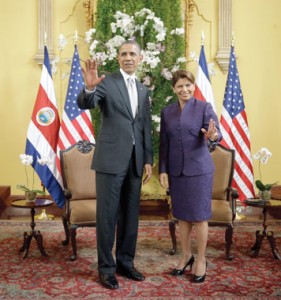 After a brief stop in Mexico to push his immigration reform bill and talk a little border security, Obama boarded his plane and decided that spending tax payer money to fly to Costa Rica seemed like a good idea.

I would like to know what was planned on being accomplished in the 24 hours after he arrived in Costa Rica……..what happens in 24 hours in any Central American country? The answer is of course nothing.

After landing he went to give address a group at the Intercontinental Hotel in Escazu where he was greeted by a Costa Rica choir of children.  After a little time there he then went to the National Theater for dinner with the heads of the countries in Central America.

All presidents then made their pitch and presented their agenda to the President or as many Democrats call him….”The Savior”.   After listening to each sales pitch given by the Presidents of the Central American countries they returned to their countries with zero plan in place.

Costa Rica was said to be the big winner in this visit. But what did they win? After clearing the streets and dressing up San Jose as a safe city; they won nothing, except a little press for tourism.

Obama and Chinchilla spoke about how they want to promote prosperity in their respective economies, but not with donations.

That’s right Costa Rica, unlike China the USA is going to make you work in order to generate money for your economy……meaning that Costa Rica will look back to china for money. Work ethic is not instilled in the culture of many Costa Ricans, especially the government entities.

The last topic that was covered was oil and gas.  Basically Costa Rica has almost no oil supply within its borders.   Hydroelectric power holds a share in electricity production above 80%, including storage. Next comes geothermal power with a share of 12% and the rest is covered by other sources like oil powered plants, coal, solar and wind farms.

Costa Rica imported about 18 million barrels of oil in 2010 most of which was used for the transportation sector of the economy.

Obama was nice enough to mention that the USA will think about setting up an alliance to export oil to Costa Rica. But there are no guarantees. United States has internal rules for the export of its natural gas and a middle income country like Costa Rica has to meet these rules if they wish to enter the “club of rich countries.”

The general opinion of the meeting was that there will be not real fruit generated from these meetings in the near future.

Have a great trip back to the USA Mr. President, you have now accomplished your appearance to pretend you think Costa Rica is important on your agenda. You made the Democratic expat community happy and gave false hope to the Costa Rican government.

Nothing is going to come to fruition from these weekends trip to Mexico and Central America except trying to push your immigration reform bill and showing your imperialistic tendencies.  Maybe next time you want to make a emperor’s trip to Central America you can head to Nicaragua or Panama so you do not screw up traffic here.

Only in Costa Rica for Week of May 6th

US Citizen Shot in CR, Trying to Get Home (Video)