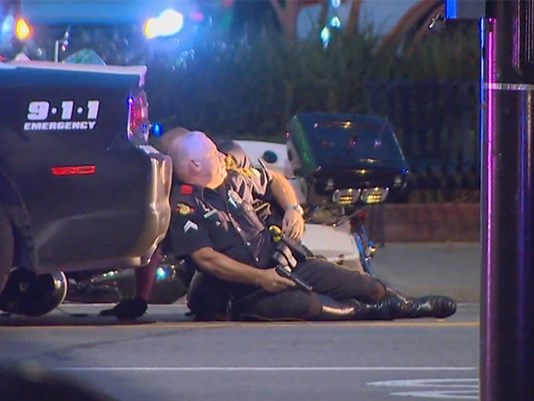 In the space of three days, we have seen the deaths of two black men during separate encounters with police in Minnesota and Baton Rouge, and a rampage in Dallas that left five officers killed.

What they all have in common is that for millions of people, these events unfolded through video recorded on smartphones and spread through social media.

As Twitter and Facebook move toward business models that favor video content uploaded by users, those images can stand as an impartial, even crucial, witness to violence that would go unnoticed if it didn’t go viral.

The Minnesota video, live streamed on Facebook on Wednesday night, appears to start just moments after an officer fired his weapon at 32-year-old Philando Castile after pulling him over in a traffic stop. Castile’s fiancée, Diamond Reynolds, and her 4-year-old daughter were passengers in the car. Reynolds streamed the aftermath on Facebook Live: a bloodied Castile, slumped back in the driver’s seat, groaning and clutching his side.

“I wanted everyone to know that no matter how much the police tamper with evidence … I want to put it on Facebook and go viral so that the people can see,” Reynolds said later.

The impact of such encounters is wide reaching. As of Friday morning, Reynolds’ video had been viewed over 5 million times on Facebook and was repeatedly played for an even larger audience on television news.

“Violence against the black community is not a new phenomenon,” Rashad Robinson, executive director of the civil rights group Color of Change, told NBC News in an email.

“But the rise in camera phones, live streaming, and social media has provided our communities with new tools and platforms to make the country aware of the injustice we face, peacefully organize and demand change,” Robinson said. “We can’t mistake the presence of these videos for the power to change the written and unwritten rules, but the visuals gives us a new way to bring more people into the efforts to create change.”

“Law enforcement and civilians both are entering a new era of recordability,” said Jeff Hancock, a professor of communication at Stanford University. “When we’re being thoughtful about the fact that our actions can leave a record, we tend to behave better.”

There have been many well-documented cases of police brutality caught on camera, going back to the beating of Rodney King in 1991.

“There have been 560 police killings this year already, including 16 in July, but the nation is talking about Castile and Sterling because of the videos,” Nicholas Mirzoeff, professor of media, culture and communication at New York University, said in an email.

“Live coverage has changed our understanding of the United States,” he said. “It’s gone from covering the great and the good to being a truly democratic form. A learning curve comes with that. Once, our media was filtered through representatives like Walter Cronkite or Tom Brokaw. Like it or not, that era is over.”

With more and more people getting their news through social media — a recent Pew Research Center survey found that more than 81 percent of Americans follow news primarily online — such videos can be powerful evidence when compared to dry police reports, and can essentially serve to level the playing field.

“Like financial markets, media move in real time and are distributed across the internet, rather than broadcast,” said Mirzoeff. “Our politics and our culture are going to have to learn to catch up.”

Facebook CEO Mark Zuckerberg wrote on his Facebook page on Thursday that videos such as the one showing Castile’s shooting “shine a light” on societal issues, saying, “While I hope we never have to see another video like Diamond’s, it reminds us why coming together to build a more open and connected world is so important — and how far we still have to go.”

At one point on Wednesday, Reynolds’ video went offline for about an hour. Social media was quick to cry censorship, but Facebook told NBC News that the video temporarily came down due to a technology error.

Facebook also put a warning on the video and marked it as disturbing.

“This is raw imagery that we’re just not familiar with — cognitively, emotionally, psychologically,” said Hancock. “We’re being exposed to raw human horror that previously was sort of managed. Mainstream media journalists have worked out a very robust set of rules and judgments. And now we’re getting around that filter. There’s definitely a shift.”