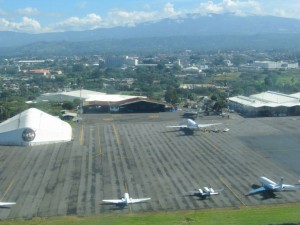 Costa Rica’s main airport, Juan Santamaria, is about to exceed its passenger handling capacity. It’s also somewhat outdated, not being able to accommodate the airlines with the largest planes. They accept 727 and 737 aircraft, but nothing larger.

Obviously, change is needed. The director general of civil aviation announced that 2025 will be the year that Costa Rica sees a new, larger air terminal that will replace Juan Santamaria as the primary international airport. There is hope that this will open up the market of airplanes coming from Europe.

The new one will have two runways and 20 boarding ramps, so that multiple wide-body aircraft can be received simultaneously. Juan Santamaria only has a single runway and 10 departure areas. 3,369,000 passengers were serviced at this airport in 2013.

The site being considered for the new airport is in Orotina. An international expert was hired to determine the validity of this location. It appears to be the perfect place, since its at sea level, far from hills, flat land, and only 30 minutes from San Jose. Leonel Leon, a pilot with 12,000 flight hours and 30 years of experience, agrees that Orotina is ideal. He points out that the weather conditions will be good, never being filled with haze.

Since it’s an open area, it’s less complicated to land, he explained. To have the runways at sea level is better for the airlines, too, because it’s more profitable. The air density and turbine output is increased, saving fuel and increasing payload.

Although this does seem like a great place to have the new airport and it will make it less of a drive to hit the Costa Rica Pacific coast there is one thing that is not mentioned……where is the money coming from?

There are a a few options but my guess would be that we can lean towards the most obvious……China. I have no problem with this considering they have already purchased Costa Rica’s soul.  Let’s only hope that they build it themselves and do not  leave it in the incapable hands of the Costa Rican government.

A Process of Relocation & Shipping to Costa Rica