Costa Rica News & Events – While sitting in a movie theater and seeing his artwork displayed in a multimillion-dollar movie with two huge superstars, all sculptor Michael Baker could say was, “Wow, this is so very cool!”  .It was nearly a year later, after he got the original call from the production company for use of one of his sculptures in an undisclosed movie, that Iron Man 3 opened starring Robert Downey Jr. and Gwyneth Paltrow, and he was able to see his piece on the big movie screen. 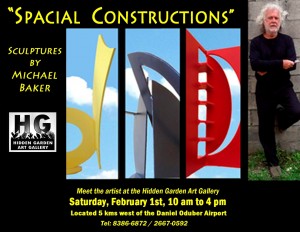 Born in Ohio, Baker never felt a strong calling to the art world until after his stint in the U.S. Air Force after which he was working as a tennis pro in Santa Fe, New Mexico. It was there that he visited the Shidoni sculpture garden consisting of of large scale sculptures that were so impressive he was overwhelmed.  The journey shaped Baker’s future and was the catalyst that inspired his intense study and mastery of metal art.

A successful sculptor from the United States, Baker is now living and working in Costa Rica, and celebrating the New Year with sculptures being placed on site at Four Seasons Costa Rica and with an inaugural solo exhibit opening at the Hidden Garden Art Gallery on February 1st. 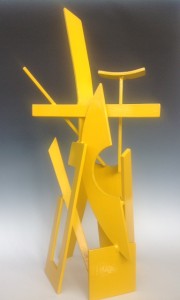 geometric shapes and forms in these new works. “The three-dimensional aspect that is created in sculpture is what fascinates me,” says Baker.” I have always strived to maintain a minimal view of sculpture, yet at the same time produce work which encompasses balance, scale, proportion and the importance of both positive and negative spaces.”

Stimulated by the works of artists Alexander Calder, David Smith, and Anthony Caro, Baker’s inspiration to sculpt is now totally second nature and natural.  He tells us that throughout any given day there is always an idea.  “When I go to the studio, one idea multiplies into many and I create maquettes (models) of those ideas; some work, many don’t.”

Over the past 20 years, Baker’s sculptures have been placed in numerous private, corporate and public collections throughout the United States, including “Circular Impressions,” Cirque Building in Dallas, Loyola University Medical Center in Chicago, Virginia Tech, Ronald McDonald Sculpture Garden, to name a few.

“Multi-dimensional sculpture has so many different mediums and compositions.  It evokes numerous sensations, based on its size, color, composition, weight, angles and curves, material, subject matter, and use of space,” says gallery owner Greg Golojuch.  “Baker’s works offer a new area of contemporary sculpture for our visitors and clients. While the predominant number of the 60 artists within our gallery are Costa Rican, we also show works by several expat artists who have permanently moved to Costa Rica, and Baker is a great addition to this group.”

You can be a part of the opening of Baker’s “Spacial Constructions,” on Saturday, February 1st, from 10 am to 4 pm at the Hidden Garden Art Gallery, located 5 kms west of the Daniel Oduber Airport.

Only in Costa Rica for Week of January 27th