Costa Rica News – I have watched over the past year as it seems that every other day a protest arises because of something the government has put into effect.  There is one thing that all of these protests have in common, they accomplish nothing.  The CR government does nothing to change what is being protested. 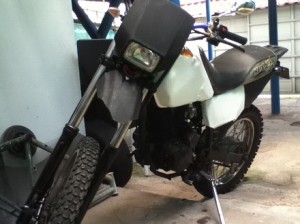 Dozens of motorcyclists protested, with a march from the National Stadium to the Legislature, to show their annoyance  of the increase in the value of the marchamo. Guess what will happen from this? Nada. Nothing. But they got a day of form work which I think is the ultimate goal of these protests.

The $180 to be paid this time by rights movement are “too high”, said Eduardo Villalobos, a spokesman of the group.

The INS argues the high accident rate of motorcycles as an argument to raise the value of the marchamo.

We will see what happens but with this huge scam ready to take place where one part of government can bill another part of government, 1000’s of dollars are going to be pocketed from this and the goal of having accident victims cared for properly and paid for will not happen.

Wrong. EVERY DAY, not one day missed, since the rodent was sElected.