Costa Rica News – It seems more and more people and media outlets are getting sick and tired of all the government corruption and misappropriation of funds. This is being seen as stealing money directly from the Costa Rica tax payers. But is this process  really doing anything? 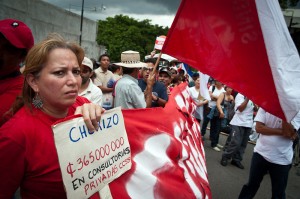 Every day, more Costa Ricans dare to denounce acts of corruption in the public service sector, reporting to the Comptroller General of the Republic or to the Office of Public Ethics. Although these reports are coming in the question is will anything actually be done.  Let’s hope all these voices help to make some changes. Costa Rica is in a downward spiral and unless the government is held accountable for their actions it will continue the fall.

The numbers of complaints this year grew in numbers and in complaints about leaders.

For the Comptroller, the year will close with a thousand complaints of illegal acts on the part of bureaucrats, while the Attorney General, has had over 160 of these complaints.

According to the study, both the Comptroller and the Office of Ethics “expanded its channels to lodge complaints, which may be personal, telephone or electronically.”

What I am worried about is the fact that although all these complaints are being filed, why is nothing happening in regards to the complaints? Out of 1160 there should have been someone fired right? Or is it a just a place for people to complain and nothing happen?

The official stressed that it should be understood that an official is not corrupt by the mere fact that he or she is working for the state, because, he said, “the vast majority are honest people.”

This seems more like a hotline for people to voice their complaints and then nothing happens.  It amazes me that the public thinks that this is actually doing anything. But I guess submitting an email or making a call to an office the government controls makes them feel better.