Weird News – I would not want to be standing in the shower next to this guy….

A 52-year-old Mexican man says he has the world’s largest penis — and it’s making his life miserable.

Roberto Esquivel Cabrera of Saltillo told Mexican newspaper Vanguardia that he would like to be considered disabled because the member leaves him unable to work, forcing him to live on assistance and scavenge for food.

His social life is dismal as well, he says. Women are too scared to be with him, according to the newspaper.

His penis is reportedly 48.2 centimeters (nearly 19 inches) long and the tip’s circumference is 25 centimeters (nearly 10 inches). Cabrera apparently provided doubters with a medical imaging photo of his penis, and the picture has rapidly circulated through Spanish-language media, including Telemundo and La Opinion. Cabrera is being tested at a local health center as doctors try to figure out what to do, Vanguardia wrote.

Here’s video of Cabrera and the image. The story continues below. 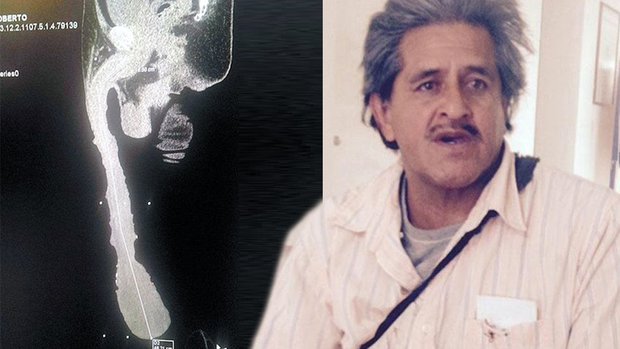 Cabrera said he wanted at least to be recognized by Guinness World Records, but an official told the UK’s Daily Star that the organization has no such category.

Responding to English-language reports that much of the appendage is excess skin (he has not examined Cabrera), Dr. Philip Werthman, director of the Center for Male Reproductive Medicine and Vasectomy Reversal in Los Angeles, told The Huffington Post that the man could perhaps be treated by a procedure akin to a “very big circumcision.”

However, the original report in the Mexican press made no mention of extra skin, so the nature of Cabrera’s penile growth remains unclear.

Jonah Falcon is believed to have the largest penis in the world, measuring 13.5 inches.