Members of CR Congress Return from Vacation but Still Breaking 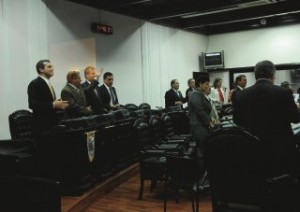 Deputies returned to Congress this morning, but the Assembly is braking. The refusal of President Laura Chinchilla to sanction the Education Minister Leonardo Garnier and Vice President Luis Liberman, for alleged offenses identified by the Office of Ethics, the opposition remains under protest.

The head of the Citizen Action Party (PAC) Yolanda Acuña stressed that the president’s response does not satisfy the opposition, leading to the opposition benches to keep the brake to vote on bills.

The deputy head of the PAC, Victor Hernandez, said this week that “hardly any project vote.”

Meanwhile, the head of the Libertarian Movement, Carlos Gongora, said they expect a “signal” from the National Liberation Party (PLN) and this afternoon the ruling fraction facilitates their votes to call the minister appear to plenary Garnier.

The opposition paralyzed the plenary prior to going on holiday two weeks ago to protest the lack of action against the leaders.

Both officials are under investigation by the Attorney General of the Republic to issue letters in favor of presidential exasesora Florisabel Rodriguez.

Rodriguez, in turn wife of former Minister of Finance Fernando Herrera, presented the cards to win a contract for 17 million with the Costa Rican Oil Refinery (Recope).