Costa Rica Entertainment News – From December 25th to January 4th the bullfights will be in full swing at both Zapote and Pedregal. There are four working men who put aside thoughts of day jobs and family and step into the ring to protect all of the fighters. They risk it all at the end of the year, for the adrenaline rush and for the tradition. 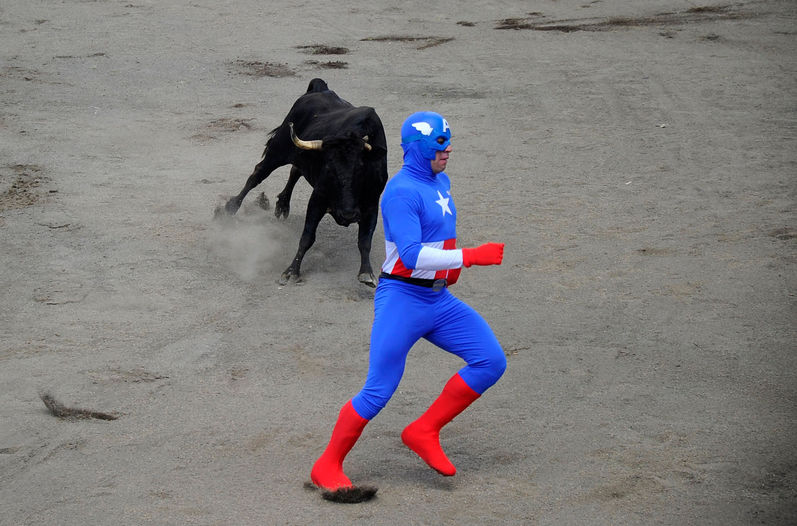 Mario Guadamuz works in payroll for Banco Popular all year. He is a celebrity of sorts. People stop him in the elevator to ask for tickets and on the streets to get autographs and photos. He grew up with the tradition, still it worries his mother, who distracts herself by cleaning the house for the 15 days while he is in danger.

Luis Gómez (el Diablo) has been attending Zapote bullfights for 31 years. His family used to have a hard time with it but now they see that its just a few scrapes for all the fame he gets on TV. He is known as “The Devil.” His sister says, “It sounds weird, but God be with the Devil.” When not fighting, he is up at 5 am daily to serve the community.

Paterson Esquivel (Laisa) is a jiu-jitsu coach in his normal life. He is also a comedy actor. He overcame the world of drugs and alcohol. In 2009 in Zapote, he was without vital signs for 3 minutes and 20 seconds. His family was waiting for a call that he was dead. Luckily he pulled through and he will be back in the ring this year.

Anthony Segura (Capitán América) is a welder during his time off from his Captain America position. He is undefeated in the ring. Still his mother’s worries are multiplied by four since her four children are bull fighters.

Looking for a LGBT Friendly Destination; Head to Costa Rica