Looking for a LGBT Friendly Destination; Head to Costa Rica

Costa Rica Travel News – San Jose is the capital city, the seat of national government, the focal point of political and economic activity, and the major transportation hub of Costa Rica. When visiting anywhere in this country, you’ll probably spend at least one night here at the beginning or end of your trip. Don’t worry, San Jose has plenty of diversions, with wild nights on the town and some of the nation’s best gay clubs for dancing, cabaret, strippers and drag performances. The Marcha y Festival de la Diversidad, is the area’s Pride celebration each June. 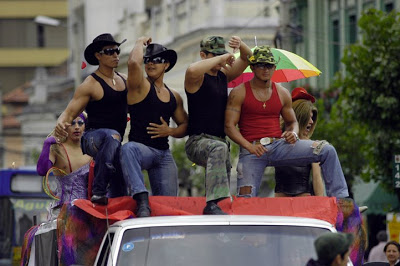 San Jose’s high altitude keeps evenings cool, meaning that it’s never too hot, even during the day. A little afternoon rain might fall during most of the “green season’’ from mid-May to mid-November, but rarely enough to keep you indoors; plus rates are often lower than in the winter months. During the many holiday fiestas in this land of Catholic faithful, the streets and parks can become very crowded with celebrating Ticos (local slang for Costa Ricans).

Founded in 1738, San Jose did not become Costa Rica’s capital until 1823, making it one of the youngest capitals in Latin America. Today it is Costa Rica’s financial, economic and cultural centre and is home to almost half the country’s five million inhabitants.

Although it lacks some of the grandeur of other Latin colonial centres, San Jose offers such gems as the Correos de Costa Rica (the post office, built in 1917), the Gran Hotel Costa Rica and the National Theatre. And while the Costa Rican Centre of Science and Culture (formerly a military headquarters) and the Costa Rican Art Museum offer significant insight into the country’s past, contemporary San Jose can be found simply by walking around its downtown, stepping into the Mercado Central, where both tourists and locals shop for locally made products, or Café Rojo (just north of Centro Costarricense de Produccion Cinematográfica), with its delicious coffee, books of Argentine poetry and adjoining movie theatre.

With its many bars and eateries, the San Pedro neighbourhood, home to the University of Costa Rica, is a place where vividly coloured graffiti complements the vibrant energy of the fashionably dressed students. Fifty metres north of the Faculty of Law is Café Kracovia and its sculpture garden. A short cab ride away is the Cali, which offers the same kind of energy. Nearby is Ravi Gastropub, owned by a handsome Pole and Italian (albeit straight) who offer a variety of fun dishes and drinks.

While Costa Rica is a truly LGBT-friendly destination, there is no gay village proper in San Jose; rather, its bars, clubs and bathhouses are scattered around the city. While cabs are cheap, not every street is marked — but recently, the city started an administrative facelift, which should make navigation easier.

Given the size of the city, the number of gay bars and clubs is astounding. For a comprehensive list of LGBT establishments in San Jose, as well as the rest of the country, check out costaricagaymap.com. Babel and El 13, both in San Jose and within walking distance of each other. The former is an after-hours bar where all interested in partying are welcome; the latter is a bar with a popular monthly night called “La Plancha.” Translated literally as “the iron,” it is a night dedicated solely to the Spanish language songs played by women when doing domestic chores. It’s a highly popular night, with the two floors packed to the brim with happy, drunk Ticos singing along to popular songs.

Inspired by international trends, San Jose is a growing city that showcases itself and its culture in various parts of the city. To find out what’s going on, grab a copy of GAM Cultural at the Tourist Office (adjoining the Gran Hotel) or check out the listings online at gamcultural.com.

A pleasant day trip from San Jose is Cartago, the old capital 23 kilometers away, where two cathedrals draw tourists. One is a 500-year-old ruin, the victim of several earthquakes; the other, famous for an appearance of the Virgin Mary, attracts pilgrims by the millions.

The Broken Road – An Angel Arrives