Elections coming up in Costa Rica on February 2, 2014 include Presidential, National Congress, and Gubernatorial. We’ll focus on the Presidential Elections and we’ll get to know the top 2 candidates in detail. That’s Johnny Araya Monge vs. Rodolfo Hernandez Gomez. Before that, our Kerry La wrote on July 27, 2013 the introduction to the top 4 candidates, and the overview of their agenda. 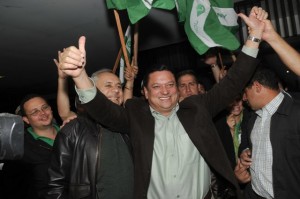 Johnny Araya is the former San Jose City Mayor and a member of the political party Liberacion Nacional. He was born in 1957 and graduated with a degree in Agronomy Engineering at the University of Costa Rica, where he served as a Faculty in Agronomy in 1980. He also attended Harvard University in 1992 to participate in the Programme for Mayors of Latin America and the Caribbean. Araya has strong background in Agronomy with almost 9 years of professional experience.

Araya believes in improving the quality of life by making efficient use of human and natural resources. During his terms, he has successfully promoted and has progressed urbanization projects such as better housing, infrastructures, roads, lighting, railways, parks, and urban landscape. His Paseo de los Estudiantes aims to bring Chinese culture to San Jose. Perhaps his only agenda left as City mayor is to improve on the number and the visibility of municipal police forces to better the safety and security of its citizens. Araya currently leads the Unimer for La Naciona survey with 26% of the votes.

Rodolfo Hernandez is a pediatrician and the incumbent Director of the National Children’s Hospital. He is a member of the Partido Unidad Social Cristiana. He was born in 1950 to Atty. Humberto Hernandez and Anita Gomez Monge, and graduated with a degree in Pediatrics at the University of Costa Rica. He also studied specialized kidney diseases at Baylor College of Medicine in Houston, Texas. During his early years in pediatrics, he served as Head of Interns and Residents at the National Children’s Hospital from 1979 to 1981. He also took office as Head of the Nephrology Department in 1999. During the peak of his career, he was a member of the Executive Committee of the American Association of Pediatrics from 1984-1985. He then served as Director of Pediatrics at the University of Medical Sciences in 1989-2000. He was also the President of the Costa Rican Association of Pediatrics, while a serving as professor and lecturer at the University of Virginia.

Being a member of the strongest opposition, it is not easy for Hernandez to carry on his presidential campaign while facing criticisms. Although this is the case, he ranks 2nd in the Unimer for La Naciona survey, with 12% of the votes. His major agenda for the 2014 is to improve on nationwide political ethics and eliminate corruption.

Where do English Teachers Live in Costa Rica?