Costa Rica News – We are coming up on an election year in Costa Rica. I am sure no one is going to be shedding any tears because Laura Chinchilla is leaving office.  Hopefully she takes her entire corrupt cronies with her when she leaves.  Costa Rica has declined because of her administration. 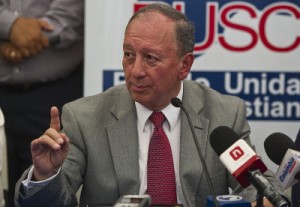 In Costa Rica, voting is not optional. Though it’s not enforced, voting is compulsory! It’s now less than a year before the next election, which will take place in February 2014. 32 % say they still haven’t decided who to vote for and 22% say they probably won’t vote at all.

There are four main parties represented in the country. The National Liberation Party (PLN) was founded after the civil war in 1951. The Citizen’s Action Party (PAC) is new on the scene, having started in 2000. They are a center left reformist party. The Libertarian Movement Party (PML) was founded in ‘94 and won 6 Congressional seats in 2002 and 2006, making them 10% of the Assembly. Lastly, the Social Christian Unity Party (PUSC) is less popular now after corrupt findings within the party. They have 3 seats in the Assembly.

The PLN candidate for the 2014 election is 56 year-old Johnny Araya who wants to bring his party back to its roots. He is a liberal, however he does not want to rescind international agreements that were made by Arias and Chinchilla. His focus is more national than that of the last two presidents. He hopes to better the infrastructure that helps both tourists and investors. He believes in bettering public universities and trade schools to increase the social, health, and economic well being of Costa Ricans.

The PUSC candidate, Rodolfo Hernandez, was the first to be announced. He used to be the director of the children’s hospital. His main stance is about ethics and anti-corruption. His biggest challenge will be to heal relations with younger party leaders who resent Calderon’s presidency.

Otto Guevara declared for the PML that, “We will win the 2014 elections,” with a slogan of “Aqui estamos,” here we are! He compares his party to athletes who are born too small to have people believe in them but grow up to become winners. His focus is on unity within his party to present a coherent front to voters.

The PAC candidate is Luis Guillermo Solis who is a political history scientist and teacher at UCR. He wants to re-establish conditions that, in the past, have helped Costa Rica differentiate itself from the rest of Latin America. He is against the privatization and trade liberalization policies and is for allowing social mobility and a distribution of access to opportunities. He believes this will reduce poverty and foster economic growth.