Makeshift Bullfighter in Serious Condition after Being Rammed

A makeshift bullfighter  is in the hospital in serious condition after being hit by a bull of about 1300 pounds.  The incident occurred on Saturday at 10:05 pm, within the circle of Guácimo Pocora bulls in Limon. The victim was identified as Carlos Eduardo Vargas Sancho, 47 year-old resident of Palmares, Alajuela. 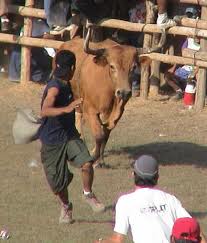 The injured man was inside the ring, in the popular celebrations that began in Pocora on Friday and end on Sunday July 15.

The improvised was taken by the Red Cross hospital Guápiles Guácimo in delicate condition due to the beatings.

The lifeguard said, apparently, Vargas was distracted with a cell phone when he was near the gate where the bulls come into the ring.

“When the man realized that the bull had left the manga, it was too late, in front of him and could not flee,” said Zamora.

Apparently, the animal jumped into the improvised matador against the wooden barrier and then rammed it into the sand several times.

The other bullfighters who were participating in the task tried to distract the animal, and it was thus able to stop beating Vargas.

Zamora said another improvised matador, identified as Rodolfo Vindas Rivera, was also beaten by the animal.”This one was wounded in the lower lip and lost two teeth,” he said.

Aeromexico will Fly Direct from Cancun to Costa Rica

I do not know WHY the Nicas and Ticos risk their health and lives doing this. Usually there is no money to be made. Unless you get the balloon on top of the bull! I would say to them wise up be smart and at least get paid. Look at the past ones who now is crippled the other with a colostomy a long time for this 26 yr old to deal with.