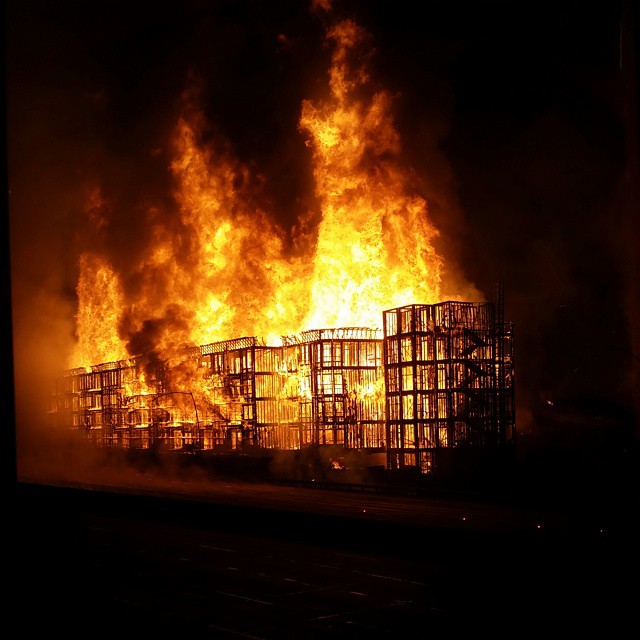 Flames and smoke from the blaze dominated the city skyline and officials told commuters to brace for a messy morning as a section of the Harbor Freeway was closed in both directions.

“This is a historic fire, what we as firefighters would call ‘a career fire,'” said David Ortiz, public information officer at the Los Angeles Fire Department. “It’s huge. I really can’t remember a building fire this big and I have been with the department for 13 years.”

Ortiz said it was too early to tell what caused the fire but said the seven-story building looked certain to be “completely lost.” Fueled by the half-finished building’s exposed wooden framework, radiant heat caused fire damage in twin high-rise buildings across the street in Figueroa Plaza, Ortiz said. Those were quickly extinguished, but the LAFD urged people to stay away from the buildings because panes of glass had fallen onto the street below.

The city’s Harbor Freeway was closed in both directions near the fire. Another major artery through the city, Hollywood Freeway, remained open but was suffering under the pressure of spillover traffic. “This will impact local traffic for hours,” said Ortiz, speaking at 3 a.m. local time (6 a.m. ET). “The commute will be very difficult.”

Creating a New Kind of Culture