LONDON (Reuters) – It’s one of the most famous names in the world, up there with the Eiffel Tower and Statue of Liberty – but now London’s Big Ben clock tower is to be renamed Elizabeth Tower to mark the queen’s 60th year on the British throne. 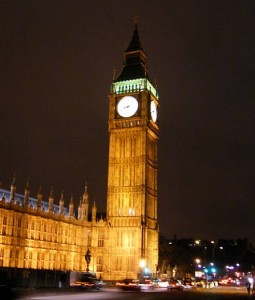 The landmark, part of Britain’s Houses of Parliament, is officially called the Clock Tower but is commonly known as Big Ben, the name of the giant bell in the tower that chimes the famous bongs in the capital.

Prime Minister David Cameron welcomed the name change. “The renaming of the Clock Tower to the Elizabeth Tower is a fitting recognition of the Queen’s 60 years of service. This is an exceptional tribute to an exceptional monarch,” he said.
Reactions among the public were mixed, however. “Big Ben is so old and iconic, what is the sense in changing its name? All over the world people won’t understand what the Elizabeth Tower is,” said Romanian tourist Mara Ciortescu.

Banker Richard Labonte said: “It’s not a bad idea, Ben is a strange name for a tower anyway and the Queen deserves it.”
The ornate 96-metre high neo-Gothic tower features four gilded clockfaces and was completed in 1859. There are 393 steps to the top of the tower, sited on the bank of the River Thames in the heart of London’s Whitehall government district.

The name change was proposed by Conservative Party lawmaker Tobias Ellwood and accepted by parliamentary authorities.

“The House of Commons (parliament) Commission welcomed the proposal to rename the Clock Tower Elizabeth Tower in recognition of Her Majesty the Queen’s Diamond Jubilee and will arrange for this decision to be implemented in an appropriate manner in due course,” a House of Commons spokesman said.

The jubilee celebrations underscored a surge in popularity for the Queen in recent years, and included the biggest flotilla on the Thames for more than three centuries, a star-studded concert and a horse-drawn procession through the capital.
However, many Britons were opposed to the tower name change. A YouGov poll last month found almost half opposed proposals to rename the Clock Tower, and only 30 percent supported the idea.