Costa Rica News – The Costa Rican government has taken out a loan from the Central American Bank for Economic Integration (CABIE), in order to construct a new hospital and medical tower, in addition to making an extension on an existing hospital. 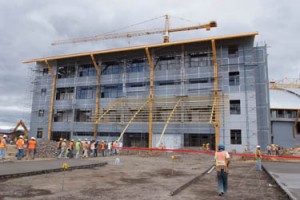 The president of the CCSS, Costa Rican Social Security, Lleana Balmaceda, signed the loan and President Laura Chinchilla was a witness of honor. $129.6 million will be put towards replacing the hospital in Puntarenas, in the central Pacific region, as the previous facilities were affected by a 7.6 earthquake that occurred in 2012.

The new medical center will be prepared to offer cardiology, hemodynamics, optometry, intensive care and critical care medicine, oncology, gynecological oncology, surgical oncology and internal medicine. The remainder of the $270 million loan will go toward the Annexation Hospital, in the north Pacific and one in San Jose.

They will expand the areas of hospitalization and medical imaging facilities in Guanacaste. A six-story medical tower will be built in the Calderon Hospital in San Jose.

This loan is being referred to as a “historical loan,” as it will forever change the infrastructure of public healthcare in Costa Rica. The quality and quantity of care options will be increased.

The general public will benefit from this substantial loan.

Is Costa Rica The New Narco-State?