NEWARK—Thirteen individuals, including one alleged member of the Genovese organized crime family and 12 members and associates of its Lascala Crew, were charged today in connection with an illegal online gambling operation, U.S. Attorney Paul J. Fishman announced. 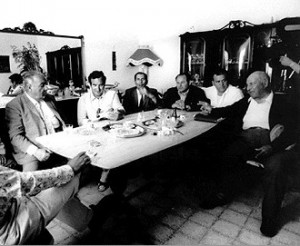 The defendants are charged with racketeering conspiracy in a complaint unsealed this morning in conjunction with arrests in the case. Two defendants remain at large. A fourteenth defendant is charged with transmission of wagering information. The defendants are scheduled to make their initial appearances later on May 23rd before U.S. Magistrate Judge Mark S. Falk in Newark federal court.

“The acts alleged in this criminal complaint show that traditional organized crime continues to pursue its bread and butter—illegal gambling, loan-sharking, and cargo theft,” U.S. Attorney Fishman said. “The new wrinkle here is the use of off-shore sites and the Internet for processing bets. Law enforcement will use countermeasures that are just as sophisticated to bring these criminal enterprises to justice.”

Joseph Lascala, 80, of Monroe, New Jersey was a capo and a made member of the Genovese crime family, directing various criminal activities of a group of associates referred to in the complaint as the “Lascala Crew.”

Members and associates of the Lascala Crew and others, together with individuals that own and operate the website Beteagle.com, used the website to profit through the operation of an illegal gambling business that operated in northern New Jersey and elsewhere.

High-level associates of the Lascala Crew acted as “agents” of an illegal gambling business that was operated through the website. Before the advent of computerized betting, these agents would be referred to as “bookmakers” or “bookies.”

The website was maintained in Costa Rica and referred to as the “office.” Although the website was maintained in Costa Rica, the bettors either paid money for losses or received money for winnings from the agent, his sub-agent, or their co-conspirators in New Jersey. If a bettor was unable or unwilling to repay gambling losses, then the agent or sub-agent converted these losses in debts that the bettor was required to repay. The agent or sub-agent often tacked exorbitant amounts of interest onto these debts and they used extortionate means to collect these debts, including the express or veiled threat that the agent, sub-agent, or their co-conspirators had the backing of the Genovese crime family.

The Lascala Crew, in confederation with the website, directed, coached, assisted, and caused bettors in New Jersey and elsewhere to place wagers on sporting events and contests, such as football.

“You’re in the wrong business now, you know?…You should be in the sports business….They’re gonna build it up to, like, [expletive] no end….I call the kid up. In the office down there, I’m really proud of him. I mean, he has 50 phones in his [expletive] place….And, it’s nice, it’s like an auction…”

Each of the defendants, with the exception of defendant Kenneth Baran, is charged with racketeering conspiracy in violation of Title 18, United States Code, Section 1962(d). This count carries a maximum term of 20 years’ imprisonment and a $250,000 fine.