Sports News – I sat down to watch the Duke/Louisville game this afternoon to see who would lock up a spot in the final 4 in Atlanta and was being treated to a great game until “the injury” to Kevin Ware. 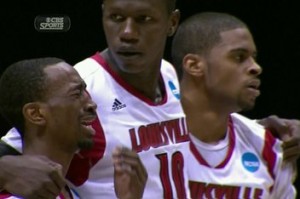 I put the injury in quotation marks because it was the most gruesome basketball injury I have ever seen.  Kevin Ware from Louisville, who was a vital part of that team went up to contest a shot by Duke.  When he landed his leg went in 3 different directions at the same time.  Saying Kevin Ware suffered a broken leg is not enough.

His bone popped out form his leg and left everyone in silence. All you can do is pray.

His Louisville teammates dropped to the floor and some began crying.  The Louisville bench could not watch as Kevin Ware let out a scream that silenced the entire building.  His season and playing career possibly over.

The video of this injury is below. (Do not watch with a queasy stomach)

What to Know; ‘Game of Thrones’ Season 3

Only in Costa Rica for Week of April 1st