Really you sexually abuse a minor you get an your case inspected and paid, but if you do a private video for your lover you get fried? Oh yeah that is right she is a woman! To show the absolute ridiculous difference between the way Karina Bolaños firing was handled and what usually happens with men in government is clearly apparent in this firing regarding a Costa Rican judge. This judge is being accused of sexual abuse of a minor and was dismissed after an inspection and is still receiving 3 days to appeal this decision as well as 3 months being paid but suspended. 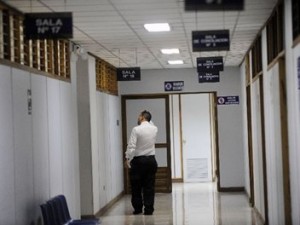 The Judicial Inspection Court revoked the appointment of the judge in the criminal courts of Limon, Sixto Solera Chaves, linked to a complaint of sexual abuse against a minor.

Judges Rodrigo Flores, Rodrigo Mendez and Coto Leda issued a unanimous resolution yesterday afternoon in a courtroom of the courts of San Jose in a private audience.

A Solera case had been officially opened because of a disciplinary case by inaccuracies in their private lives and affected the image of the judiciary, after being accused of sexual abuse.

The mother of the victim, who was present when the sentence was read, said the Court noted that there was loss of honesty, credibility and trust officer for the acts charged.

“It was found not what I was saying, but what happened.The evidence proves it. This statement is not going to repair the damage he did to my daughter. I wanted to shout that finally somebody believed me, “said the woman.

Now the officer has three days to appeal the decision to the Superior Council, so that failure is not yet firm.

The judges ordered further Solera be suspended from office on full pay for three months as a precautionary measure, pending an appeal. Are you kidding!!!

The Inspectorate handles administrative cases against six other Solera by several faults. In one of the reasons it was determined that the judge assigned computers contained large amounts of pornographic images .

Meanwhile, the Office prepares an indictment for three counts of sexual abuse against a minor, four of aggravated corruption, two production and four for the dissemination of pornography, which occurred between 2007 and 2010.

Solera was introduced on December 23, 2010 before a judge as a defendant Guápiles sexual abuse of a minor, a neighbor of the same area, and imposed several precautionary measures for a year because of the likelihood and dangers of escape criminal and obstruction.

He was ordered to maintain a fixed address and present to sign every 15 days in the Criminal Court of Limon also was issued barred from leaving the country, and not communicate, threaten or annoy the victim or witnesses.

On the other hand, was forbidden to use your work email to send pictures, documents or video pornography, and to learn, or fail to resolve on an issue which is being investigated, tried or solving a sex crime.

With these last two measures, the Supreme Council determined that Solera had lost the indispensable condition for becoming a judge.

On 23 November the same year, the Council agreed to suspend it, given that the Judicial Inspection opened the disciplinary case.

However, in February 2012, the Secretariat of the Full Court asked the Executive to examine how Solera could play their roles to give back the salary he received to be suspended. On March 22, he was authorized to resolve cases against Retardation Program Branch.

Trying to figure out the Costa Rica laws and court system is a waste of time. Karina should file a denucia(claim) against President Laura Chinchilla for illegally firing her. However, I believe the President above the law here as like other ex Presidents.I wonder IF Laura jealous! just saying.