It had taken FOUR hours for the 15-year-old to get ready, including application of fake nails, a wig and a session in her own spray-tan booth. But this wasn’t preparation for a special occasion. For two years Hannah set her alarm for 4.15am and went through this lengthy routine EVERY DAY. 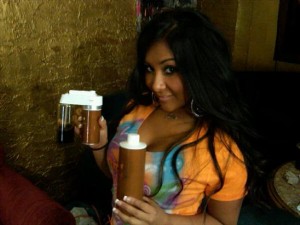 She says: “I was obsessed with Snooki on the reality show Jersey Shore and became addicted to applying fake tan so I could look like her. Prepping for a night out could take me eight hours. I would cancel plans so I could apply layers and layers of tanning solution.”

Now 17, Hannah has learnt to embrace her pale skin after suffering scary side-effects of the fake tan.

She says: “My skin was completely stained and I couldn’t get the orange residue off. For two years I never saw my real skin colour. I just kept re-applying the tan to cover up the awful mess that my skin was in underneath.

“I used so much fake tan over that period that my skin is now allergic to the chemicals.”

New research shows that this kind of reaction is becoming more common.

Danger ingredients inside tanning sprays and creams include hormone-disrupting compounds — known as gender benders — along with carcinogens.

Other components in the chemical cocktail include allergy-causing skin irritants and substances which release poisons — including cancer-causing formaldehyde and nitrosamines.

Elizabeth Salter-Green, of the UK charity CHEM Trust, added: “Many of the chemicals in fake tan are toxic to reproduction and can harm a foetus.”

Fake tan sales are worth £100million a year in the UK and are the fastest-growing area for cosmetic sales. A third of women and one in ten men admit to using it.

Her dad Bryn, 51, a fitness instructor, was footing the bill and had even bought her her own spray-tan machine for her bedroom.

Hannah, who is now studying childcare at Cross Keys College in Gwent and lives in Cwmbran, says: “I couldn’t stop myself. I loved being really dark and I wanted to look like Snooki so I spray-tanned myself every day.

“People used to abuse me in the street but it didn’t bother me because I wanted to stand out. Wherever I went, people noticed me and I liked that.”

Bryn and Hannah’s mum, housewife Deb, 50 pleaded with her to tone it down but she didn’t listen.

Now in recovery, Hannah admits she was severely addicted to tanning from the age of 13. She says: “My first application was when I was 12.

“My mum and older sister Clare sometimes put on a bit of fake tan and I saw it in mum’s bathroom one day and just decided to try it.

“I applied a layer but nobody really noticed the next day so that night I applied another layer. Over the next few nights I applied more and more until people started complimenting me on my radiant glow.

“Within a few weeks, I started to get hooked.”

Hannah’s pocket money had started out at £15 a week but by the time she was 14 she’d managed to persuade her parents to give her nearly £100 a week.

She says: “By the time I was 14 I turned up late for everything because it took me so long to get ready. By that stage, I’d plucked out my eyebrows so that I could draw on a dark Scouse-brow. People would shout ‘Oompa Loompa’ in the street.”

But underneath her brash exterior, Hannah was desperate to be taken seriously. Having done well in her GCSEs, she wanted to go to university but knew her daily routine was getting in the way of her studies.

Hannah was trapped in her clownish style until March, when she realised how unhappy she felt.

She says: “I felt silly and I think I was finally growing out of the outlandish look.”

She began trying to get the tan off with her family’s help.

She says: “It took four hours just to scrub off all the fake tan with lemon juice.

“I now realise that my health and well-being is more important than my image.”