World News – Well this would be of no surprise considering the large number of people that have had dirt on Hillary have also ended up this way, but would the public finally believe that this is not a conspiracy theory if this is true? Is Julian Assange dead or most likely murdered? Maybe he should have hid in Costa Rica…..

Rumors are flying that something sinister happened to Wikleaks’ Julian Assange. According to Fox News, “WikiLeaks said Monday that its founder Julian Assange’s internet link was ‘severed by a state party’ and that ‘appropriate contingency plans’ were activated.” 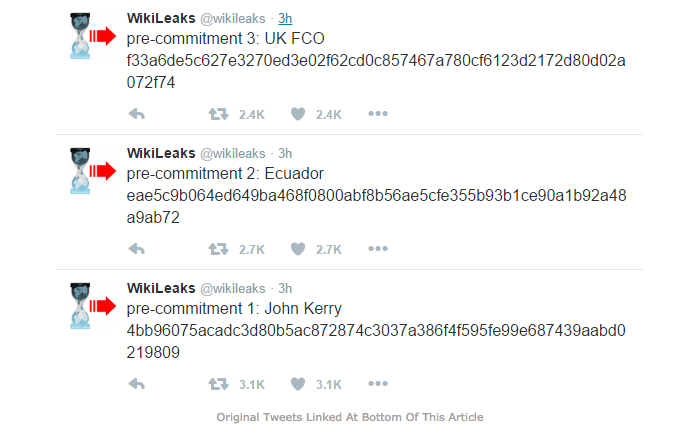 Rumors on Reddit and Twitter said that the numbers triggered a so-called “dead man’s switch,” which could be enacted in case Assange did die. Gizmodo reported that such switches do exist

WikiLeaks hasn’t tweeted anything else about Assange’s internet and how it may have been “severed.”

Three years ago, Wikileaks put 3 files on their website, as an insurance policy for Assange, should something bad happen to him. The keys provide a way for the information to be made to the public, should something happen to Assange. Well Sunday evening, those 3 keys were released, encryption for those files.

Not long after this happened, an anonymous source confirmed that the information provided in the tweet is a sort of confirmation code called an SHA256 hash. With this code one is able to confirm that the integrity of the document is sound. In essence, it’s a digital chain of custody. Wikileaks has listed three names associated with these files: John Kerry, Ecuador, and the UK’s Foreign and Commonwealth Office.

In addition to these tweets, Wikileaks also released a series of encrypted files onto the web as a safeguard. If anything should happen to Julian Assange, the password to those files will be released to the general public. One can only assume that the contents of the files are pertaining to the above-mentioned “targets.”

Following the mysterious Tweet from Wikileaks, hackers immediately began to panic, not taking the event lightly at all: 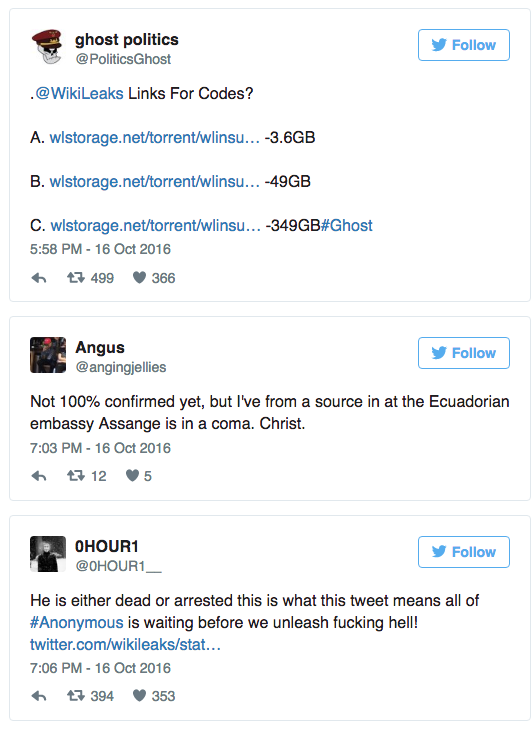 How completely chilling! We will keep you updated as more information becomes available.