Costa Rica Sports News – It seems like it would be too soon to forget Costa Rica’s inspiring and exciting run in the 2014 World Cup, but that remains the most plausible explanation for the team being so lightly regarded in the upcoming Gold Cup tournament. Many, including the Mexico and United States squads themselves, seem to believe that these two are destined to meet in the final yet again and have dismissed the chances of any other CONCACAF team to claim the title. 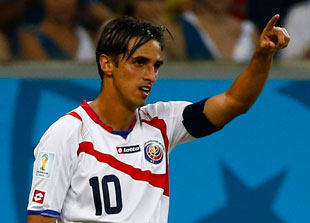 It’s odd partly because besides impressing with a run to the quarterfinals in Brazil, Costa Rica is also currently the highest-ranked team in CONCACAF, with a June FIFA world ranking of 14. It also had probably the toughest June preparation schedule in the region as well, taking on Colombia, Spain and Mexico. Though the Ticos failed to win any of those matches, they pushed each of their opponents hard and should be primed for a deep Gold Cup run.

Though the World Cup coach for the team, Jorge Luis Pinto, has moved on to coach rival Central American squad Honduras, the Ticos have maintained continuity by appointing Pinto’s assistant Paulo Wanchope as their head coach.

Wanchope led the squad to the Copa Centroamericana championship in September 2014. With his own history as a player to draw on, Wanchope’s loyalty to, as well as his understanding of, his players may make him the ideal manager for the squad as it tries to break the stranglehold that Mexico and the U.S. have traditionally had on the Gold Cup.

It may be, however, that Costa Rica is overlooked as a threat partly because smaller countries usually have limited depth and the Ticos are short a few key stars for the upcoming tournament.

Keylor Navas, Oscar Duarte, Marco Ureña and Yeltsin Tejeda are all missing out on the Gold Cup. Navas, the goalkeeper who was so extraordinary for the squad during the World Cup, will be especially missed.

Yet the team is also getting back the services of veteran striker Alvaro Saborio for the Gold Cup, though he had to miss the World Cup due to an injury. Costa Rica also has top star Bryan Ruiz involved, and he is deadly around the goal.

Costa Rica battled Mexico to an even 2-2 draw on June 27 after surrendering the equalizing goal to Javier “Chicharito” Hernandez, who scored via a fine header. Now that Mexico will be without the injured Hernandez, it’s not hard to extrapolate that the Ticos may well be the better squad with their current players.

Another reason Costa Rica might be taken lightly in Gold Cup competition is, that despite being the class squad of Central America for decades, the team has chronically under-performed in the tournament’s modern era (since 1991).

Panama has reached more Gold Cup finals than Costa Rica, who made the finals only once, back in 2002. But following a World Cup in which Costa Rica shocked many other countries, there’s no better time for the squad to finally live up to full potential in regional competition.

The team’s style of play is quick and efficient, yet more reliant on team play than sheer athleticism or speed of attack. More than anything, it has often been lack of infrastructure that has held back national team success, but with a new national stadium built in 2011, a stronger youth team structure, more players going abroad and a stable professional league (Primera Division), Costa Rica is reaching new heights of success.

Ultimately, though, it may be to the national team’s benefit to be considered the underdog compared to the U.S. and Mexico. After all, the Ticos have played at their best when little was expected of them, and thus, they may be content to be passed over as pre-tournament favorites. It’s probably better for them as well to have the Mexicans and Americans worrying about each other and perhaps not preparing for or anticipating a tough fight against Costa Rica.

By Andrea Canales covers both Liga MX and the Mexican national team for ESPN FC. Follow her on Twitter @soccercanales

Chinese Stunned as $2.8 Trillion Is Wiped From Markets