Costa Rica News – Well I do not know whether to laugh or just chalk this up as another only in Costa Rica moment. My friends and I used to always joke around and comment as it seemed that every other day was a Costa Rica holiday.  The conversation would go something like this: 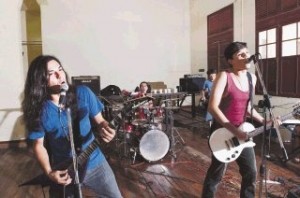 Kevin: Why are the busses not running today?

Bob: It is another Costa Rica holiday.

Kevin:  They had one last week, what are they celebrating now?

Bob: It is the day of celebration for the bean. (Kind of a play on the fact that most meals down in CR have beans as a side)

Well Costa Rica took this to the next level today when instead of traditional dances, a garage band named Rice and Beans welcomed the Independence torch. Maybe if they play during breakfast they go by the name Gallo Pinto.

The idea is to offer a different event, but with an appropriate message for the celebration of the 191 anniversary of Independence.

The torch will pass through the hands of some 20,000 students in its journey of 386 kilometers from the border at Peñas Blancas and the city of Cartago. 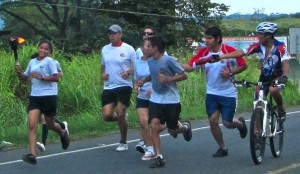 The first student to carry the torch will Evin Murillo Chacon, who is in ninth grade at La Cruz.

Murillo, 27, was chosen as an example of excellence, and who returned to the classroom after dropping out during her teen years. During the day, she works in Santa Rosa National Park.

Guiselle Cruz, national coordinator of the Civic Committee of the Ministry of Public Education (MEP), said the main message is to promote coexistence.

After crossing the border with Nicaragua today, the fire of freedom will be in La Cruz at 12:30 pm, to arrive in the late afternoon and in Liberia and pass the night in Bagaces and Cañas.

On Friday Esparza will be hit at 4:50 am, and then continue to San Ramón, Palmares, Naranjo and Valverde Vega. It is expected to be in Grecia at 12: 55 pm

It will be in Alajuela be at 2:45 pm and then continues to San Jose, Heredia and enter Cartago at 8 pm

The torch has traveled throughout Central America since 1964, on the initiative of Professor Alfredo Cruz.