First, there is no method to meditation, so the title is a misnomer. Meditation means initiating the unwilled movement of negation, which ends psychological time.

Whether one calls it meditation, mindfulness, or simply awareness, meditation begins with learning the art of undivided observation, which has become essential to remaining inwardly alive in this dark and decisive age.

The human mind, for tens and probably hundreds of thousands of years, has cultivated an accumulative brain. The hominid brain evolved to notice and store information about its surroundings. From that storehouse, the conscious mind forms useful knowledge and skills to exploit vastly different environments. No other animal on earth does this.

This accumulative tendency does not stop with useful information however. The brain records virtually all experiences, as well as every fear, hurt, and sorrow. That forms the content of individual and collective conditioning, which is darkness.

Conditioning is not a given; the mind/brain has the capacity to remain young, pliable, and innocent. But one has to work arduously but playfully at it, or conditioning, and along with it the accumulation of ‘dark matter,’ gradually narrows the mind, shrinks the heart, and diminishes the capacity for awareness of the brain.

A shift in consciousness begins the moment that the separate observer ends and the accumulative mind/brain begins to empty itself of the unnecessary content of memory. That includes images about oneself and others; automatic associations triggered by words, sounds, or smells; ideas and emotional patterns about ‘my family,’ ‘my town,’ and ‘my country.’ This psychological content is inherently divisive, delimiting the potential of the human being, and giving rise to conflict and war.

For the mind’s ancient habitual accumulative habit to give way, and the emptying of the mind and heart of useless content to take place daily, the automatic mechanism of the observer has to end. There is no method to doing that; one simply passively but energetically watches the movement of one’s own thoughts and emotions.

If you aren’t taking sittings now, you can begin, perhaps after taking a walk, by finding a quiet place. Preferably a safe 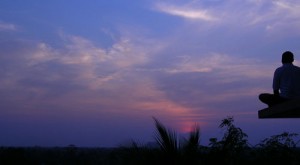 spot in nature away from lots of people and man-made noise, but even just an undisturbed patio or balcony will suffice.

Take a half hour and set everything aside. Let your senses attune to the environment, especially sound. Listen to every sound and noise without judging, interpreting, or even naming. (If you find yourself judging, interpreting, and naming, don’t struggle with it, but passively observe that movement as well.)

Then in the same way—without goal and effort—let your attention come to the total movement of thought and emotion within. Jotting down things that come to mind, such as things to do later, questions, or insights helps to bring a natural, un-imposed order to the mind, and open spaces within.

Watch all of one’s reactions in the same way, that is, passively. It’s all part of the same movement, which we divide by choosing what’s ‘good or bad,’ what we like or dislike.

Keep watching carefully, and you’ll see that there’s always an observer that stands apart from what it’s observing. The observer is the separative movement of the human mind, the ‘I, me, and mine.’

Passively listening and watching, attention gathers. When undirected, unwilled attention catches the mind in the act of separating itself from itself, the observer spontaneously ends. One’s awareness suddenly opens up. It feels a little miraculous every time it happens.

Then there’s just observing the whole undivided movement of thought/emotion. The unconscious begins to tell its story, and deep emotions may bubble up. Again, just passively stay with them and watch them. Let everything that is presently 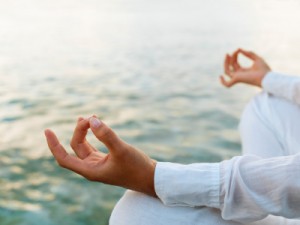 happening within unfold without interference or judgment.

Keep attending, and the mind-as-thought falls silent. Then the wordless experiencing of meditation, of timelessness, begins. Experiment and play with it!

The fog had begun to burn off, then returned to wrap around the hills and linger over the fields. As it began to lift again, the mist refracted the light in such a way that every twig and leaf stood out with tremendous vividness.

Despite the gray, earth-hugging blanket, the morning was mild, and there was little dampness or chill. I sat without discomfort under a huge sycamore, peering out over the fields toward the enshrouded canyon and foothills beyond town.

The visibility was about 200 meters. Suddenly for the first time in over a year, I saw a falcon, right at the edge of the fog. It flew 20 meters or so, and then hovered, repeating the pattern a half dozen times until it disappeared into the mist.

The sight of the falcon’s exquisitely graceful flight at the edge of the world produced a reverential feeling. Suddenly the things around me, which had appeared flat and colorless, came alive. It felt as though one was watching an ancient earth with the eyes of everyone who had ever felt its mystery.

The little creek, completely dry the last few months, is running full again. For the Native Americans who made this area their home, the return of the water would have been an important event. When we are deeply aware of the earth, and look with innocent eyes, we glimpse the land through the eyes of all the people who have lived upon and loved it.

Standing slowly and rising to my full height, the entire panorama lay before me. I was jerked back to ‘reality’ by the sight of three new ‘monster houses’ going up at the mouth of the canyon. This town has had the sense to preserve the canyon, but it has not seen fit to prevent the view of its most precious asset from becoming the private reserve of a wealthy few.

The welcome sun began to warm my back. It quickly dispelled the fog over the fields and hills. I stood still for a few more minutes, feeling grateful for having been given the capacity and time to receive such a benediction.

Only in Costa Rica for Week of Sept 17th